Tango returns to The Cross 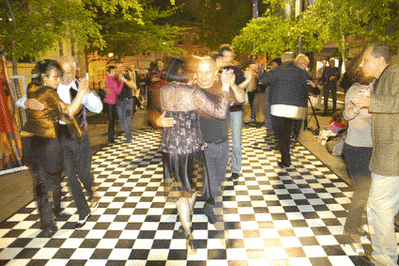 'If you can think, feel & move, you can dance the Tango,' says Sophia Alvarez, instructor with Patio de Tango.

Ah, Sophia, but you have to do all three at the same time!

Watch the experts and join in yourself this Sunday at Piccolo Park in Roslyn Street -- 7.30pm till 10pm.

It's a great evening that gives The Cross the sort of fun flavour we like to see.

The picture is from their last event in Springfield Plaza, part of last year's Arts Festival organised by the Kings Cross Arts Guild.
Email ThisBlogThis!Share to TwitterShare to FacebookShare to Pinterest
Posted by The Editor at 9:41 am 0 comments

Pix coming to the park 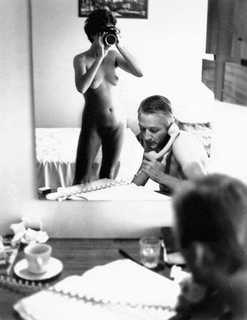 The third year of Pix in the Park is about to happen again.

One of the more delicious highlights of the (ex) Kings Cross Arts Festival, it serves up an eclectic mix of always-interesting films with a stong Kings Cross connection.

Pix in the Park, held in Fitzroy Gardens, will screen on Saturday 25 November 2006. Enjoy a selection of short films and the multi-award winning documentary 'Girl in a Mirror' (pictured). Seating will be provided at the back but if you want to sit in the front section then we recommend you bring a rug for your bum! Pics in the Park starts at 8pm.

'Girl in a Mirror' documents the work of the late Australian photographer Carol Jerrems who mixed with filmmakers, photographers and musicians of the urban counter-cultures in Sydney and Melbourne in the '70s, as well as the dispossessed – women, children, Aboriginal people and youth gangs, and are the subject of her work. Carol Jerrems also captured her own death, from a terminal illness. She passed away at 30. Girl in a Mirror traces the passionate and exuberant course that Jerrems took through this turbulent decade.

Editor's note:
Lack of funding for the Kings Cross Arts Festival means this and other events are starved of publicity because the festival enabled 20,000 programs to be distributed citywide promoting all the events. That no longer happens.

Council's strategy of cherrypicking certain events without publicising any of them speaks for itself.

Come along and stick it up the purse-mouthed bureaucrats who do Clover's will.
Email ThisBlogThis!Share to TwitterShare to FacebookShare to Pinterest
Posted by The Editor at 9:10 pm 0 comments

Posted below under (Part III)

Just hang in there, you bastards, and defeat them at the shopfronts, the trenches, the roadworks, and with the fighting spirit that is within the ornery denizens of King's Cross.
Remember her as Queen's Cross.
Remember Rushcutter's Bay as the scene of the first white massacre by the natives.
God save you all, in this bloody new-age battle for land and the rights of the indigenous people.
Long live the business precinct!
Long live the Pub!
Is there no harmonious path for all the warring parties?
I need to walk my baby on the paths, be they littered with the filth of the poor, the rich, the elderly, and the residents!
God save my right to walk safely!

Amen
Email ThisBlogThis!Share to TwitterShare to FacebookShare to Pinterest
Posted by The Editor at 8:50 pm 3 comments

Readers of this blog will remember my confrontation of Clover Moore about Council breaking its own rules to over-fund the Kings Cross Partnership and halve funds for the KX Arts Guild's annual arts festival, now effectively completely defunded. (See blogs below)

Months later, Clover has replied with a two-page letter that completely ignores the specific references I made to the council resolutions that had been disobeyed by staff. Clover rabbits on, basically re-stating what council did in a typical bureaucratic snowjob.

So Clover has now specifically endorsed what seems to be blatant staff misbehaviour.

Meanwhile council continues to fund an unrepresentative body which has little support in Kings Cross and is chaired by a commercial real estate agent from Blakehurst. Its recipe for revitalising Kings Cross as an exclusive haven for A-list gentry has always failed and will always do so because the social forces which create the place are not just going to evaporate.

Meanwhile the City has de-funded a widely supported arts body which exists on volunteer labour and has repeatedly mounted highly successful festivals even when funding was improperly halved, and continues to function with no funding. This is entirely contrary to Council's spin around our Local Area Plan which goes on and on about the importance of the arts.

The reason is obvious: The former has an agenda that reflects Clover's obsession with converting Sydney's entertainment, red light and backpacker precinct into a high-cost 'mother and child friendly' retail-and-latte nonentity.

The Arts Guild network on the other hand consists of people who live here because they like it and whose events tend to enhance the area while maintaining its character.

The matter will be considered for further action at the next 2011 Residents Association meeting.
Email ThisBlogThis!Share to TwitterShare to FacebookShare to Pinterest
Posted by The Editor at 1:59 pm 1 comments

Council continues its bias against our community

Council continues to reject out-of-hand genuine, well-considered requests from our part of the community -- requests that would do a lot for the amenity of this area.

We have been asking for ages for a public access 24-hour noticeboard in Springfield Plaza. There are three main reasons for this:

First we simply need a medium of public communication in a town where the only public information is council banners and JC Decaux advertising. We don't even have an effective local newspaper (this blog excepted!).

Secondly because it would change the mix of people in the plaza in a way that addresses the concerns of police and the local NIMBYS without persecuting the rough-edge element who currently exercise their perfectly sound right to linger in public space.

And thirdly because it is the best place for a noticeboard because half the population of Potts Point and Elizabeth Bay walk past it twice a day en route to the station.

Clover Moore wrote to me with the almost-famous 'problems with curatorial control' letter and promised a city-wide review of noticeboards about which we have since heard nothing officially. I got CityRAGs (City Resident Action Groups) to endorse our request.

There was a survey in which I set out specific requirements for the board.

Now I am told plans for the Plaza have been released (2011 Residents Association was not informed) and there is no noticeboard included. (The Council has previously mumbled about putting it in Fitzroy Gardens). Also I hear via RESNET (city residents group) that council will be placing cylindrical poster thingies of some kind uniformly across the city. They plan to tear down ALL the posters every five days. Too bad if you put your notice up five minutes before the book-burners arrive.

To be continued...
Email ThisBlogThis!Share to TwitterShare to FacebookShare to Pinterest
Posted by The Editor at 10:29 am 1 comments