The Sydney Morning Herald continues its poor journalism on the topic of drugs by printing without balance or comment yet another AAP story regurgitating propaganda from NCPIC (the National Cannabis Prevention and Information Centre, where I hear the staff are already getting mightily annoyed with its highly paid Director Jan Copeland's focus on demonising cannabis at the expense of balance or truth).

The whole story, showing "links" between cannabis and depression is a transparent beat-up of the kind exposed elsewhere on this blog so I won't analyse the whole thing.

But simply take the lie in the last paragraph which claims that cannabis smoking "leads to brain shrinkage", referring no doubt to the study discussed in the hyperlink above which in reality showed only a tenuous link to brain shrinkage and could equally have shown that unemployment is the cause (and it ignores a larger study which showed no shrinkage, both views backed up in a New Scientist report).

Again in the present case, the sample who mention cannabis to doctors came from atypical minorities, just like the 'brain shrinkage' and the 'cannabis causes violence' furphies spouted by NCIPC and published in The SMH. "Users were more likely to be male, young, unemployed or on a low income and indigenous", says the SMH story. So the study could equally have concluded that being a young unemployed Aboriginal is likely to lead to depression and dope smoking. That's not on NCPIC's agenda though.

They even go so far as to infer that this study shows cannabis is more harmful than amphetamines. This is not only bizarre, it's dangerous if it leads to a reallocation of resources away from the hard drug to the soft drug. Frontline social workers in Kings Cross I speak to are flabbergasted by this tripe.

There is another giveaway in the story, which: "...also revealed that mentioning cannabis use to a doctor was very rare". Jan Copeland is "disturbed" by this, another unscientific assertion about data that could equally show that very few of the 750,000 weekly users in Australia see it as a problem.

It's just like the junk studies that showed that 90% or so of cocaine users had smoked cannabis and concluded that pot led to coke use. But a simple re-examination of the stats demonstrated that only a small minority of regular pot smokers used coke, refuting the first conclusion. Be careful what you believe, dear reader, it's all smoke and mirrors (to use an apt analogy!)

For "balance" the story includes an ideological comment from the AMA's Dr Rod Pearce who essentially argues that cannabis causes harms under prohibition therefore we need more prohibition. THINK about it!
And if I am right about NCPIC, what a colossal waste of taxpayers' money! 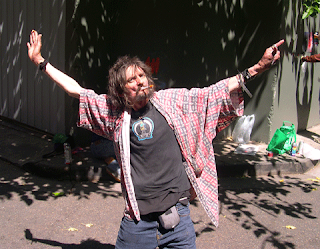 One of the better known street characters of Kings Cross died this morning, suddenly collapsing after attending St Vincents Hospital Casualty.
Pal, as he preferred to be called, was a gentle, intelligent person who was dealt a lousy hand in the game of life. He suffered from a variety of physical and mental problems which combined to exclude him from society and employment. However he never complained, and was always honest in his activities and courteous to the many locals who befriended him.
He was dependent on charity and welfare for survival. His deterioration and death in his forties is a testament to the poor standard of care available to marginalised people.
The photograph was taken in October 2004 at his request after he had found a used syringe in the street and posed with it in his mouth.
His funeral is likely to be this week at the Wayside Chapel, where he was a regular.

PS: (3/10/08) Pal's real name was John O'Connor and this week's Wentworth Courier carried a story about St Vincent's Hospital staff who knew and liked him and held a dinner in his memory. He had admitted to the hospital over 800 times.
PPS: (7/10/08) The Sydney Morning Herald ran a major story on Pal on October 4. Thanks to the anonymous commenter below for the link.
Email ThisBlogThis!Share to TwitterShare to FacebookShare to Pinterest
Posted by The Editor at 4:32 pm 5 comments

Up to $12 billion says prohibition has failed

Faced with the reality that recent massive hauls of ecstasy have not made any visible difference to the availability of the drug, the Australian Crime Commission has dramatically increased its estimate of the size of the illicit drugs market.
They say between $4 billion and probably nearer $12 billion dollars annually are flowing out of Australia into the hands of international drug dealers, reports The Age today.
While not concluding that the War on Drugs has failed, the ACC is going to brief the government on 'revised strategies'.
This recognition of the real situation makes a mockery of prohibition groups who call for a 'tougher on drugs' approach, because the financial cost of eliminating a drug economy of that size would be astronomical, not to mention the social cost of the ugly militarised society we would have to create and the economic cost of convicting and punishing a very large percentage of the population.
Taxpayers would very quickly tire of paying through the nose while being stopped at gunpoint and forcibly drug-tested wherever they went, because that is what it would take.  They would quickly realise locking up pot smokers is not as important as providing good health services or transport infrastructure because the former does not affect them but the latter does.  The solution would be far worse than the 'problem'.
The soaring debt levels of the US government alone makes effective prohibition unaffordable, and indeed there are reports they are already cutting back their Drug War spending.
On the other hand, legal controlled availability would earn money for governments and greatly reduce crimes committed to fund the purchase of illegal drugs, particularly burglaries and muggings. The small minority who do experience problems with drugs could be better off if treated and educated. It would be a much nicer world for all of us.
PS: (29 September 08) A follow-up story in today's Age provides support for this analysis:
"Criminologist John Walker... believes the ACC's figures should spark alarm about the failure of traditional policing to fight the drugs trade. 'Law enforcement cannot solve an economic problem. It never solved prostitution or prohibition. In fact, what police do makes it worse because it drives up the price.'"
Email ThisBlogThis!Share to TwitterShare to FacebookShare to Pinterest
Posted by The Editor at 2:07 pm 3 comments

Barry Ward, one of the two journalists who originally investigated the murder of Juanita Nielsen, has posted a comment beneath another story on this blog. It is worth bringing to the fore:

I have just discovered the Kings Cross Times blog and refer to your articles on Juanita Nielsen.
Some of your readers may know my name or even recall meeting me when Tony Reeves and I conducted our investigation into the killing back in the 1970s. The following is one of many articles I have written on the subject over the years. It will enlighten those who may not have been around at the time. The battle continues……

This year brings the 33rd anniversary of the murder of Kings Cross newspaper publisher Juanita Nielsen. It will also mark another year in the silent conspiracy of corruption that surrounds what may have been the crime of the century in NSW.

When Tony Reeves and I began our journalistic investigation back in 1975 we described it as the story of a lifetime, then The Story That Won't Go Away. For three decades we've been rebuffed in our attempts to force a commission of inquiry, to expose the truth behind this sordid tale of police and political corruption, of betrayal and heinous brutality.

But the story hasn't gone away, and neither have I -- although I was forced to leave Australia because of my activities.

The story surfaced again recently with the publication of a book whose author claimed to have found a witness with new evidence. I wrote a critique showing that his book was merely an extension of the official version of events, the cover-up, and e-mailed it to all of the Sydney media. Even though I am well know to most of them and the fact that my critique contained some astonishing facts only one editor bothered to reply and that to tell me that he preferred the police story!

This shouldn't really have surprised me. Our erstwhile colleagues in the Sydney media have long been not merely ambivalent but antagonistic in their approach to this story and to Tony and I. Orchestrated by the PR Dept of the NSW Police, they have accepted the official version of events without the slightest attempt at corroboration. Even though they all reviewed the book they wouldn't consider my critique of it, just as they ignored a major story that touched upon the case back in 1975.

Let me explain. In the course of our investigation Tony and I traced Eddie Trigg, the last person said to have seen Juanita alive. Within minutes we had been beaten up, abducted and handed over the Darlinghurst Police who threw us into jail for the night. "A good yarn," we agreed, when the goose bumps had abated. There was more good copy to come.

We pleaded not guilty to the spurious charge of being found drunk in Darlinghurst and, thanks to two pro bono barristers, fought the case as it lasted eight days over as many months. The charge was eventually dismissed but not before the case, which also involved two QC's on "watching briefs" for unidentified clients, had set two legal precedents. Another good yarn, we agreed. The transcript ran to 175,000 words.

But not one of those words was reported by the Sydney media. Like our allegations surrounding the killing of Juanita, the story was ignored. It might never have happened.

No one wants to know the truth about the Nielsen conspiracy. My rationale is that the political implications are too far-reaching, too dangerous. That, though, doesn't explain the shameful attitude of Sydney's journalists. They are a disgrace to the calling that Tony and I love.

If you'd care to read my critique of the Rees book and get an insight into what Tony and I achieved you can do so courtesy of the only branch of the Sydney media not afraid to run it. It was published without question by Fiona Prior on the Henry Thornton current affairs website. Read it by clicking on to the hyperlink below: No, there was no response to it, legally or officially……. http://www.henrythornton.com/article.asp?article_id=2714

I have written a novel which bears more than a passing resemblance to the Nielsen conspiracy but, like their media colleagues, Sydney’s publishers have proved ambivalent. So I have self-published it Those who wish may download it at http://www.lulu.com/content/2880339

My warmest regards to those Victoria Street residents and other caring folk who may remember me.


Barry Ward
barry@ward5525.freeserve.co.uk
Email ThisBlogThis!Share to TwitterShare to FacebookShare to Pinterest
Posted by The Editor at 10:55 am 2 comments