The voice of the majority

The comment below was posted under a story by some kind person. I think it is closer to the majority view around here as distinct from those shrieking 'shock-horror-impact-ban-everything'!

"Well, well, well. Who cares if someone moved into an area 5 years ago or 100 years ago? If one rents or if one owns? All who meet national citizenship and residency requirements are allowed to enrol on the electoral roll.

In terms of various claims regarding compensation for those driven out by visual clutter etc - rent or buy a property in Pymble if you don't like it - it is a free country - use your democratic rights to protest if you don't like a DA - don't be immature about it. If not, move somewhere else - owner or renter - simple as that.

Furthermore, this country should be quintessentially about free speech. The puerile comments from some on this blog regarding certain possible legal matters are baseless, ridiculous and futile.

This blog is an embodiment of what makes Kings Cross so fabulous - colourful locals who contribute something of their personalities to the life of the community.

Good on the Kings Cross Times and when are you coming back to print!!!"
Email ThisBlogThis!Share to TwitterShare to FacebookShare to Pinterest
Posted by The Editor at 4:56 pm 3 comments

Works by Peter Kingston and Martin Sharp are on exhibition at the NSW AG until 19 November. The two famously worked at the Yellowhouse on MacLeay Street. Sharp is a personal favourite of mine dating back to the third LP I ever bought -- Cream's Wheels of Fire featuring a fabulous psychedelic cover on metallic stock. The exhibition is free.

Sydney views hugs as a liability

Typical of this uptight city -- Council and police could not handle Juan Mann giving away free hugs in Martin Place and Pitt St Mall so they stopped him until he could produce a $25m public liability insurance policy. It's one of Council's favourite blunt sticks to suppress community activity from those they don't favour

Mann collected 10,000 signatures on a petition and the City relented, to their credit.

But not before the saga got worldwide publicity via YouTube, 60 minutes and newspaper coverage. To see the (original) Sick Puppies vid clip featuring Juan Mann (since voted Youtube clip of the year) click here.

More prosaically city resident groups have repeatedly asked Council to provide a blanket Public Liability policy for the activities of community groups (like North Sydney does) but they are not interested. But it's back on the agenda of CityRAGs (City Resident Action Groups) so we'll see what our new CEO, Monica Barone, makes of it.
Email ThisBlogThis!Share to TwitterShare to FacebookShare to Pinterest
Posted by The Editor at 12:16 pm 0 comments

A visual feast coming up

Cross Projections is on again soon. This cinematic experience of sight and sound never fails to excite and impress, and you tend to see the pictures the photographers want you to see as distinct from magazine or gallery fare. 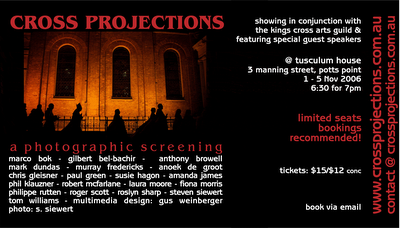 Email ThisBlogThis!Share to TwitterShare to FacebookShare to Pinterest
Posted by The Editor at 10:42 am 0 comments 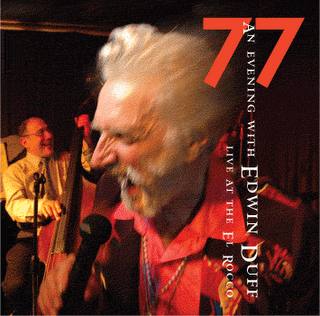 It's one of those 'must have' pieces of Kings Cross memorabilia -- 75 minutes of Edwin Duff and the David Smith Trio, professionally recorded on the eve of Edwin's 77th birthday at El Rocco in Kings Cross. There will be only 100 copies printed of this deluxe first edition and they will only be available at Edwin's gigs, so if you want a bit of that old Kings Cross magic to keep forever, come on down.

Edwin and the boys will be back this Wednesday with part III of the 10-part Sinatra Symposium 'Thanks to Frank'. It's a lot more than the usual Frank impersonator belting out a few numbers, too. Among the usual hits the band also performs the lesser known gems put in a fascinating historical context.

You hear all these great young singers entering the field -- and then you hear Edwin and you can only hope that the others eventually attain the command over the music Edwin pumps out, seemingly without effort.

Yes, Musicians of this calibre deserve an income, so don't be stingy! Bring your trailer, bring your money, bring your wife and SAVE!
Email ThisBlogThis!Share to TwitterShare to FacebookShare to Pinterest
Posted by The Editor at 5:03 pm 1 comments 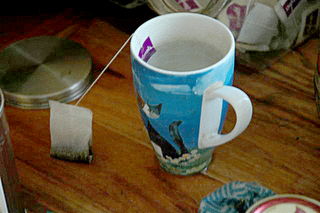 A friend who is not getting any younger became very annoyed with himself when he saw he had done this at breakfast the other day. Soon, though, he saw the funny side and got the camera out.

At least it wasn't Irish Breakfast Tea.
Email ThisBlogThis!Share to TwitterShare to FacebookShare to Pinterest
Posted by The Editor at 1:38 pm 0 comments

Council's planning committee will hear final submissions on the Urban Design Study from stakeholders at 5.30pm on Monday 16 October. While the Glebe study generated only seven submissions, City East generated 62.

Two of the attachments are so big they are only available on cd by special request.

A quick glance at the summary submissions revealed that all the property owners wanted higher floorspace limits. One sensitive soul who wanted Harry's Café de Wheels removed because of all the problems it has generated since the 1950s failed to persuade council, who say it is not in their power to move any particular business.

Click the headline for a link.
Email ThisBlogThis!Share to TwitterShare to FacebookShare to Pinterest
Posted by The Editor at 5:46 pm 0 comments

The temperance union is gonna love this! (From Council's business papers:)

On 5 June 2006, Council resolved to undertake research into the nature and impacts of licensed premises in Kings Cross. The research has considered demographics, the business mix and economic, social and historical context. The Kings Cross Licensed Premises Research report has been prepared by consultants, Urbis JHD.

Key findings from the report include;
• There are 65 licensed premises in the Kings Cross precinct. More than half of these are licensed restaurants. Nearly half of the remaining liquor licenses are for hotels, nightclubs or theatres.

• Of the 65 licensed premises, three venues trade on a 24 hour basis.

• Licensed venues add to the “colour, vibrancy and activity” of Kings Cross, and the majority are well managed and operate without incident.

• There is a strong correlation between alcohol-related crime and late trading licensed premises in Kings Cross. Despite this, residents in the City East area feel safer than the average City of Sydney resident.

• High densities of late night licensed premises generate cumulative impacts (ie: crime, litter, noise). These impacts are amplified by a lack of late night transport options. The work of the Kings Cross Licensing Accord in attempting to mitigate these impacts via voluntary staggering of closing hours was noted.

• ‘Saturation’ or the exceeding of an area’s ‘carrying capacity’ for licensed venues should be determined in terms of saturation of impacts rather than the number or ratio of licensed premises in a specific area.

• The report recommends that further research, joint operations, advocacy and improved information sharing between Council, NSW Police and the Office of Liquor, Gaming and Racing occur.

RECOMMENDATION
It is resolved that Council:

(A) note the information contained in the Kings Cross Licensed Premises Research report, as shown at Attachment A to the subject report; and

(B) note that the research will be used to inform the preparation of the Late Trading Premises Development Control Plan.
Email ThisBlogThis!Share to TwitterShare to FacebookShare to Pinterest
Posted by The Editor at 5:24 pm 1 comments

The race is on

Clover Moore has announced her candidacy for the seat of Sydney in 2007.

Her first fundraiser is scheduled for 17 November. She is currently calling for campaign volunteers.

Clover is running against Edward Mandla for the Liberals and her Deputy Lord Mayor Chris Harris for The Greens.

It will be interesting to see whether Clover's stranglehold on power both in Council and as MP will work for her or against her in the March ballot.
Email ThisBlogThis!Share to TwitterShare to FacebookShare to Pinterest
Posted by The Editor at 2:41 pm 2 comments

After ten years of lobbying, the music industry is applauding moves to revitalise Sydney’s live music scene as part of proposed changes to the Liquor Bill to go before Cabinet.

An an inaugural 'Music in the House' luncheon at Parliament last week, Premier Iemma said: “music has been a big part of my life ever since I sported a flannelette shirt, a leather jacket, and a mullet back in the 70s and 80s”.

He said his all-time favourite band, the Foreday Riders, were regulars at the Cat and Fiddle in Balmain.

They were pretty hot, too. Screamer Jimmy Barnes and rocker Billy Thorpe were at the luncheon, MC'd by weatherman Mike Bailey.

The moves follow concerns that Sydney, once a powerhouse of bands and original music, is falling way behind other state capitals because of expensive and complex licensing requirements.

It is hoped the new rules will shift the emphasis in some venues from poker machines and 'doof' music to live performers.
Email ThisBlogThis!Share to TwitterShare to FacebookShare to Pinterest
Posted by The Editor at 12:40 pm 0 comments

Local heritage figure Andrew Woodhouse has threatened me with defamation action over comments posted below under the story
It seems an open public debate about local issues is not acceptable to some. 'There is no such thing as free speech,' Mr Woodhouse said to me in the street when I did not agree to his demands to remove unspecified comments.

I have not removed any comments because I cannot find any that are defamatory and I am reluctant to censor the views of those who post here merely on the basis of Mr Woodhhouse's say-so. On legal advice I asked Mr Woodhouse to specify which words he considered defamatory but he responded with a 'do not communicate with me see you in court' message. I have posted both emails in the comments thread linked above.

By co-incidence a flurry of then appeared on this blog. One of them was so highly defamatory it's almost funny, spluttering this:

"The editor's predeliction for pot-smoking, late night sex clubs and menage a trois is well known in the strip"

That would make me the grooviest grandpa in Sydney but, alas, the claim is not true. You really have to wonder how someone's mind can be small enough to write such stuff.

It's a cautionary tale nonetheless. I urge anyone posting comments to avoid personal criticism and stick to the issues. I carry the can for your words and I am very reluctant to begin trying to control, edit or censor them -- even the ones attacking me.
Email ThisBlogThis!Share to TwitterShare to FacebookShare to Pinterest
Posted by The Editor at 11:01 am 1 comments

Demonstrating that there are good ways to build political profile, Lord Mayor Clover Moore last week gave $25,700 to The Wayside Chapel for "Fresh Start", a new activity program to provide pathways out of homelessness.

The Wayside will use the money for computer, life skills, recreation, literacy and arts programs for their clients. A previous local beneficiary from the Trust is Hopestreet, Woolloomooloo for creative expression programs for children and young people at risk.

While Clover's generosity deserves heartfelt applause, the problem of her holding dual roles is a real one. Anyone who is unhappy with the actions of the Lord Mayor ideally should have the local member to fall back on. Unfortunately in our case it's the same person, and to that extent local democracy has been compromised.
Email ThisBlogThis!Share to TwitterShare to FacebookShare to Pinterest
Posted by The Editor at 10:35 am 2 comments