The Pope needs new media advisors - or a new brain 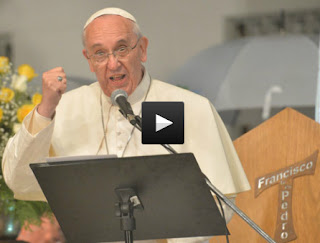 In a tour of Brazil punctuated by street riots from poor people protesting against the state expenditure on same, he has pontificated about drug prohibition.

He criticised South American governments who, facing the destruction of their societies and economies by the USA-driven War on Drugs, have espoused regulated legalisation.

"The scourge of drug-trafficking that favours violence and sows the seeds of suffering and death requires of society as a whole an act of courage," he said.

His prohibition stance misses out on the unfortunate fact that prohibition itself creates the violence and death. Just think Al Capone's Tommy-gun street shootings compared with your local pub taking a delivery of kegs in the morning. The Pope is effectively saying: "Illegal drugs create violence so you must make them more illegal", an idiotic circular argument.

Francis the Infallible Pontiff  then went all kind and human, saying this: "Rather it is necessary to confront the problems underlying the use of these drugs, by promoting greater justice, educating young people in the values that build up life in society, accompanying those in difficulty and giving them hope for the future."

As if this would be impossible under regulated legalisation, rather than infinitely more possible if it was government policy. His veneer of kindness is just code for a violent military crackdown on people who prefer drugs other than alcohol. He is either a Fool or Evil.

Or both?
Email ThisBlogThis!Share to TwitterShare to FacebookShare to Pinterest
Posted by The Editor at 11:13 pm 0 comments

Links to this post
Labels: Drugs and prohibition, the language of spin, World Youth Day

I've been facebooking rather then blogging for a while but I had to comment on this story from The Irish Times because it encapsulates the prohibitionist nonsense that too many supposedly quality news journals accept and regurgitate without balancing comment.  It's as if otherwise intelligent and cynical journalists are so completely blinded by prohibition propaganda that they are hypnotised into toeing the line like rabbits in headlights.

It seems an alarming number of people  have died recently in Scotland and Ireland after taking 'ecstasy' - eight in Ireland and six in Scotland.

As usual it seems the problem is not 'ecstasy' as in MDMA but other more dangerous chemicals such as PMA, 5IT or AMT.

Of course this is happening BECAUSE OF PROHIBITION, which ensures there is no regulation on the underground, untaxed drug trade. This of course is not mentioned, with police and doctors coming out with the usual howlers:


“It is a form of chemical Russian roulette: you don’t know what you are taking, you cannot be sure what they contain and you are putting yourself in harm’s way,” said Det Chief Supt Roy McComb.

That's true, Detective McComb - but it's only because of prohibition. So your statement is the perfect rationale for legalising and regulating the much safer drugs.

The same goes for this:

"...the police service has issued a warning about ecstasy bulked out with a slower-acting chemical, which carries an added risk because users may take extra pills under the misapprehension that the drug is not working."


"...called for new laws to address the problem of so-called “legal highs”, substances which may be sold as plant food, bath crystals or pond cleaner, but which produce similar effects to controlled drugs.


"Controlled drugs", Det McComb?  IF THEY ARE "CONTROLLED", HOW COME SO MANY PEOPLE ARE APPARENTLY DYING FROM THEM? Not to mention that prohibition does jack up the price of illicit drugs and creates a market for the newer, untested drugs that sniffer dogs, for instance, are not trained to detect.

Nevertheless, McComb is on a roll:


“We need legislation to deal with the issue,” said Mr McComb. “There are many people out for a fast buck. People are selling products and they don’t know if that person is going to be alive the next day.”

But here's the real kicker. A common pattern when people have problems from illicit drugs is a reluctance to seek treatment BECAUSE OF PROHIBITION. Dr Richard Stevenson, Glasgow Royal Infirmary's senior specialty doctor in emergency medicine, said of the Scottish deaths:


"All the fatalities were due to symptoms which are treatable if help is sought early - sadly in these cases they all came into A and E too late."

The police in these cases are doing little more than featherbedding their own power and massive drug enforcement budgets. Too bad about the casualties.
Email ThisBlogThis!Share to TwitterShare to FacebookShare to Pinterest
Posted by The Editor at 2:11 pm 0 comments