Prohibitionists in the US are bending over backwards to show legalisation of cannabis in some US states is causing the sky to fall in, just as they always predicted. Recently an Australian prohibitionist triumphantly circulated this 'important' information on email lists:

Panic stations! Legalisation has started a rush of those dangerous stoned drivers! We told you so! (SAM, by the way, is the new soft-pedalling face of prohibition.)

Smelling a rat, I immediately asked: "Was there a corresponding increase in traffic accidents?"

I later speculated on the lists that police, deprived of their 'easy money' busting potheads, might be doing more drug-driving tests, which would account for the increase.

Then a list member posted the following, supporting my speculations:

"...according Washington State’s Traffic Safety Commission “Target Zero” data for 2013, the fatality rate from incidents involving drunk and/or drug-affected drivers is actually the LOWEST that has been recorded in more than seven years. http://www.wtsc.wa.gov/statistics-reports/crash-data/

"If more people really are driving whilst seriously impaired, why is there no spike in road fatalities?

"And yes Michael you are quite correct, police in Washington State have indeed conducted significantly more drug tests in 2013 than in previous years.

"That last piece of information comes from Bob Caulkins, the Media & Community Relations Officer for the Washington State Patrol:

"However, the number of tests being ordered has increased, on pace for 180 more than the prior year. It can also be true that cops are more likely to order a blood test in a pot case now. As Caulkins told Huffington Post, “We’re testing blood we didn’t test before.” So do we actually have more stoned drivers on the road or are cops now just better trained and incentivized to go after them?"

"Could it be that greater access to marijuana equals less abuse of alcohol, leading to lower traffic deaths from both?

Let's see what Time magazine has to say on the subject:

Read more »
Email ThisBlogThis!Share to TwitterShare to FacebookShare to Pinterest
Posted by The Editor at 5:32 pm 0 comments

Links to this post
Labels: Drugs and prohibition, Stoned driving, the language of spin

Getting the facts about Thomas Kelly's manslaughter. 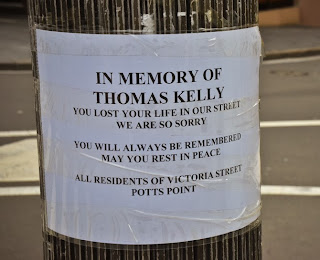 The War on Kings Cross continues, with the king-hit killing of Thomas Kelly being dragged in by both sides of the debate.

In letters to the Wentworth Courier, the AHA's Paul Nicolau rebuts a previous claim by local resident Jo Holder that Keiran Loveridge had been served alcohol in Kings Cross before he king-hit Thomas Kelly. In fact both are wrong. J Campbell's published Supreme Court judgement says:

"...before catching a taxi to Kings Cross where they went to a bar in Darlinghurst Road shortly before 9pm. There is no agreement about whether the offender consumed more alcohol in this bar."

The anti-alcohol brigade always blame venues for violence, claiming they don't apply Responsible Service of Alcohol (RSA) provisions, ie refusing to serve drunks. Apparently they ignore this in the interests of maximising their evil profits. However I can get absolutely shitfaced and still act sober enough to get into a pub and then served.

The judgement does say Loveridge had been refused entry to a bar in Bayswater Road at about 9.30pm immediately before he started on his violent rampage. Possibly this bar's correct application of RSA principles actually triggered or aggravated his violence, illustrating the dilemma venues have in managing pre-fuelled drunks - they are damned if they do or don't. It illustrates that RSA is an inexact science and tighter enforcement will not necessarily solve problems.

It also annoys me that this tragic crime has been enrolled by the anti-alcohol brigade in their campaign for earlier closing and lockouts at venues.  It happened at about 10pm folks. How would earlier closing have helped that?

Paul Nicolau also claims that violence in Kings Cross has already dropped by 37% as new precinct management principles have been applied over the past few years. This fits with what I know from local sources and neutralises the anti-alcohol brigade's mantra that Kings Cross should emulate Newcastle's lockout regime, which is said to have reduced violence by the same amount.

It's also interesting reading the rationale behind the controversial sentence imposed on Keiran Loveridge. I think it was a fair sentence by the standards of our legal system. However the role of Loveridge's involvement with Rugby League is seen as a mitigating factor rather than part of the problem, as I have previously blogged.

Email ThisBlogThis!Share to TwitterShare to FacebookShare to Pinterest
Posted by The Editor at 12:36 pm 0 comments