WA drug laws get even tougher

Colin Barnett's Liberal Western Australian government has just made its already draconian drug laws even tougher according to the PerthNow site:


PARENTS could be jailed for 12 months and their children put in state care for growing just one marijuana plant in Western Australia under arguably the nation's toughest drug laws.
Amendments to WA's Misuse of Drugs Act, which came into effect on the weekend, mean people convicted of cultivating a single cannabis plant or processing the drug where a child has suffered harm face a 12-month mandatory prison term.

The laws are targeted at methamphetamine labs but, typical of the 1950s thinking of this government, cannabis is drawn into the net. WA already allows its police to use number plate scanning to detect drivers with a previous drugs conviction before stopping and searching them (while rapists, child molesters and murderers can drive on, free). The moves not only ignore current evidence on the failure of mandatory sentencing, but ignore the government's expert advice that tougher prohibition would not solve any problems.  But evidence is rarely a strong point for conservatives.

1950s thinking with modern technology: how very Orwellian. One comfort is that the over 100 comments on the Perth Now piece overwhelmingly ridicule the new law and logically shred the few illiterates who support it. BTW 'illiterate' wasn't used as an insult. They simply can't spell or construct a sentence as they spew their hatred of "druggy scum" etc. Great mates has Mr Barnett.
Email ThisBlogThis!Share to TwitterShare to FacebookShare to Pinterest
Posted by The Editor at 3:01 pm 0 comments

How prohibition supersized the 'ice' industry 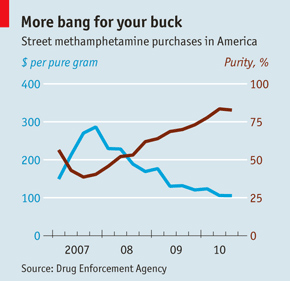 Respected pro-reform journal The Economist lists some revealing statistics about the explosion of the methamphetamine industry under prohibition. 'Ice' is now being produced on an industrial scale. The graph illustrates how the purity has improved as the price has dropped in the US, making a mockery of the War on Drugs which suppresses relatively safe, natural drugs only to see more dangerous alternatives flourish, along with narco-states - poor countries which make a fortune from the artificially lucrative trade. Cambodia was in the news the other day, with the Prime Minister's nephew narrowly avoiding arrest in Melbourne on trafficking charges. With whole countries involved in the drug trade, even the USA is powerless to stop a trade for which their own citizens are the world's biggest customers. The harms of prohibition are worse than the harms of drugs.
Email ThisBlogThis!Share to TwitterShare to FacebookShare to Pinterest
Posted by The Editor at 3:01 pm 0 comments

What is it with The Sydney Morning Herald that as soon as the subject turns to cannabis the broadsheet turns into a credulous tabloid? One Nicole Hasham on Wednesday wrote the following about a paranoid schizophrenic who had killed his fiancee:


His heavy marijuana use had triggered paranoid delusions and imaginary voices which told him that his friends, family and workmates were "part of an elaborate conspiracy".

Really? Dope causes mental illness causes murder? So simple. Let's fix it by banning it. Oh wait, we already have. Fortunately this sledgehammer simplification was corrected on Thursday in the letters column by a doctor:


'Just say no' can be a dangerous message

It is a pity that, having written well about the important matter of mental health services in prison, and illustrated the benefits of good treatment and management through the story of Sunil Hemraj, you chose to head that article, ''Hard road back from deadly habit'' (March 21).How was any purported habit ''deadly''? What was deadly was Mr Hemraj's delusional state, which has been attributed to his suffering with paranoid schizophrenia. The role of cannabis use in either the precipitation or causation of schizophrenia is still poorly understood. But in any case, it is the mental health problem, however caused, which can be deadly, though fortunately not as often as is portrayed in the media.

Some studies suggest that 3000 people would have to stop using cannabis to prevent one case of psychosis, so cannabis use is not the most common risk factor. More often, this association merely illustrates the point that the peak age for both using cannabis and the onset of schizophrenia in males happens to coincide.

The major problem with cannabis use I see as an addiction physician is that if one is unfortunate enough to experience a mental health problem as well, many health workers and services will adopt the view that ''it's all your own fault'' and thus miss the opportunity to intervene early in what could be a serious, but treatable, health issue.

Mr Hemraj was fortunate that his mental health problem was taken seriously and treated well. For many others, what they get may be just a message to go home and stop using cannabis, which will not in general make any difference to the progression of a psychotic illness.

Email ThisBlogThis!Share to TwitterShare to FacebookShare to Pinterest
Posted by The Editor at 1:47 pm 1 comments

Laneway drama a storm in a coffee cup

A local dispute reported in the SMH over café chairs in Llankelly Place Kings Cross has escalated into a bit of a drama via emails and letters to the editor.
After the original story appeared I got an email from someone I didn't know - David at exemail - copied to restaurateur Neil Perry, demanding that Mr Perry apologise for siding with the Room 10 coffee bar in Llankelly Place. I replied, asking who 'David' was, where he got my email address, and also siding with the coffee bar. Mr Perry replied this morning, not apologising but explaining he was not a 'celebrity chef' -

I'm an Australian who employes 520 staff, pay millions in taxes and raises lots of dollars for charity. I own 7 businesses in 3 States of Australia, I believe in young people making a difference.
Thanks, Neil

It seems Jo Holder of the Cross Arts Gallery, said to have complained about the seats, has some supporters besides 'David' at exemail (who did not reply to my email).

Next came a letter in the SMH from Carole Ferrier, a local Labor branch colleague of Ms Holder's and close ally in the War Against Pubs. She complained about café people keeping people awake at night, making it sound as if she lived above the café. But I'm pretty sure the café doesn't open at night, and as far as I know Ms Ferrier lives in Altair, facing east - about  half a k from the café. But maybe she's moved downmarket?

Don't go back to the bad old days

Carole Ferrier (Letters, March 14) needs reminding that Llankelly Place where Room 10 is situated, was formerly a rat and needle-infested laneway. It was frequented by prostitutes, drunk revellers and addicts needing a place to shoot up. There has been a concerted effort by council and local business people to bring life and a sense of community to an area of Kings Cross that sorely needed rejuvenation.
There are now at least a dozen restaurants, cafes and shops in this alley that provide employment, services and a sense of security to locals. Would she prefer the bad old days?
Adrian Young Elizabeth Bay

I grew up in Kings Cross many years ago, but even then it was a noisy, rambunctious and ''colourful'' precinct, and has been, famously, since its hobohemia days of the 1920s and 1930s. Moving into it and complaining about noise is a little like diving into the ocean and whingeing about being wet.
John Newton Glebe

Then two more great letters turned up on March 16:

Cross still the king
Of course Kings Cross is noisy (Letters, March 15). It is peppered with people struggling to survive in society, and sometimes violent, but you won't find a livelier place to live anywhere in Australia.
Norm Neill Darlinghurst

Old memories of Kings Cross are many but mine are dominated by an event in the early 1950s. I was having an illegal, after-hours drink in a dive called Le Primatif. I was with a former Wallaby when there was a raid by the vice squad detective Bumper Farrell and the local police. Bumper sighted David, the ex-Wallaby, and said, ''Get out, Dave, and take your dopey mate with you". Nice to be recognised.
Graeme Berman Manly

Email ThisBlogThis!Share to TwitterShare to FacebookShare to Pinterest
Posted by The Editor at 2:48 pm 0 comments

OMG the idiot level of public debate is excruciating. Take climate change. The more climate sceptics, and their champions the Murdoch press, are refuted by scientists, the lower becomes their rhetoric. The Daily Telegraph the other day published one of the most pejorative pieces of moronic abuse ever seen in print, mocking Tim Flannery because it's raining. As if climate scientists ever predicted the La Nina/El Nino cycle would go away. The tone of the drivel is set by the headline: "It's a case of Tim foolery..."

Meanwhile The Sydney Morning Herald published a piece on the latest - quite alarming - National Climate Report from the CSIRO which reveals that isotopic fingerprinting of all-time-high levels of carbon in the air shows it mostly comes from humans burning fossil fuels. And much more. No doubt Clive Palmer will ignore this as he uses his billions to sue the government over the carbon tax. Perhaps Clive reads only the Telegraph?

And more on corporate greed as an ex-Goldman Sachs manager tells how the firm enjoys "ripping the eyes out of the muppets". (Muppets = clients). Sweet. Yes, this piece is also from a Murdoch site but it comes under the tabloid formula heading of "Look how the working bloke gets ripped off" while the Flannery piece comes under the "Let's mock all greenies and lefties" heading.
Email ThisBlogThis!Share to TwitterShare to FacebookShare to Pinterest
Posted by The Editor at 11:10 am 0 comments

The amazing cost of mandatory sentencing

Mandatory minimums severely damaged the credibility and reputation of the justice system and put innocent victims behind bars. Perjury increased dramatically, as perpetrators attempting to avoid long mandatory sentences concocted stories to convince prosecutors that other, minor participants were really the ring leaders. Threats and killings of civilian witnesses (“snitches”) became epidemic, and non-drug legal matters were squeezed out of strained court systems.

However the conservative Harper government appears determined to ignore the evidence, and commonsense, in pursuit of his pointless War on Drugs ideology.

Why are such conservatives so stupidly bloody-minded?
Email ThisBlogThis!Share to TwitterShare to FacebookShare to Pinterest
Posted by The Editor at 1:24 pm 0 comments