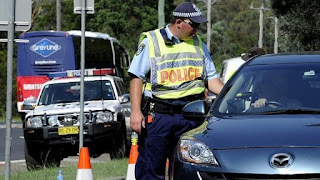 "Evidence-based" seems to be a term not comprehended by some NSW Coalition ministers, especially the National Party's Duncan Gay, Roads Minister.

The decision to drastically ramp up drug testing on NSW drivers, despite the program being almost farcically ineffective, demonstrates again the ideological fairyland inhabited by Gay and his colleagues.

Too bad for the victims of this pogrom.

Greens MLC David Shoebridge has posted a comprehensive rebuttal of the program which should be read by all drivers, especially Duncan Gay.

But it's a cinch the man who just increased penalties for bike-riders by 350% won't bother. After all, those pesky bike-riders all probably smoke dope anyway, right Duncan? And after all, the rash of 4WDs being written off by cyclists just demands action, right?

You're an intellectual giant mate.
Email ThisBlogThis!Share to TwitterShare to FacebookShare to Pinterest
Posted by The Editor at 4:03 pm 0 comments