Welcome to a nation of craven dobbers 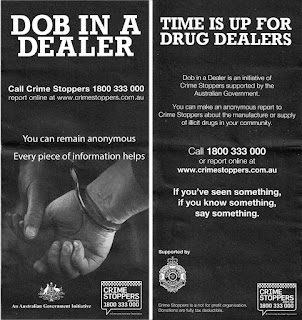 I picked up this flyer in a Queensland police station. When I went to school, dobbers were about the lowest form of life. Police themselves are very hard on 'dobbers' in their own ranks but they seem to have a different standard when they want the public to do their work for them.

In other news, a reported 60,000 complaints have been received by the Tax Office, dobbing in people for tax-dodging. Now at least tax-dodging, unlike drug use, is an actual crime that hurts others. But I just wonder how many anonymous complaints are tricked up to satisfy a personal grudge or simply used as a bullying tactic?

I very much doubt that any of the authorities involved will publish figures on how many dobs prove baseless.
Email ThisBlogThis!Share to TwitterShare to FacebookShare to Pinterest
Posted by The Editor at 1:59 pm 0 comments

But Peter Dutton's Home Affairs Department is pushing back, arguing the move would create “uncertainty for law enforcement and at the Australian border”.

Yup. Gotta have "certainty" or the world will collapse. No shades of grey in Peter Dutton's world. Meanwhile the victims of this stupid and ineffective regime can keep clogging up the court system for no good reason and with few good outcomes. That's a certainty! Read more here.

Email ThisBlogThis!Share to TwitterShare to FacebookShare to Pinterest
Posted by The Editor at 1:50 pm 0 comments

Links to this post
Labels: Drugs and prohibition, Federal politics

By Gove, that cocaine sure is dangerous

The blatant hypocrisy of conservative politicians on drug prohibition is on show once more.

British prime-ministerial hopeful Michael Gove is under fire for snorting cocaine in his younger days. He says it was a 'mistake', and reiterates that the drug is 'dangerous'. So dangerous it could put one in reach of the top job, it seems.

But the real hypocrisy is Gove's history of being 'tough on drugs', happy to have people jailed for something he has himself done, in pursuit of power via the votes of ignorants. He denies this is hypocrisy. Sheesh.
Email ThisBlogThis!Share to TwitterShare to FacebookShare to Pinterest
Posted by The Editor at 8:14 am 0 comments

NSW is descending further into something resembling a police state, with thousands of citizens being strip-searched in the name of drugs prohibition – a regime with little or no rational justification.

Most people searched are young or Indigenous, according to a report in The Sydney Morning Herald.

Two-thirds of the searches turn up nothing, and among the "successful" searches police say they have found items such as vehicle number plates.

I'm pretty sure I would be able to detect number plates on a person without stripping them.

Other searches turned up such deadly items as "art" or "stationery".

The justification for the searches can only be described as dodgy: "Under NSW law a police officer can carry out a strip search if it is necessary for the purposes of the search and if the seriousness and urgency of the circumstances make it necessary," reports the SMH.

I'm not sure how "serious" or "urgent" it is to detect someone carrying an amount of say, cannabis, so small it can't be detected without stripping the citizen. Or stationery for that matter (I'm guessing that may have been a case of shoplifting, another "serious" and "urgent" matter it would seem).

Most of the drugs-related searches are triggered by indications from a sniffer dog. In other words, the search victim had been doing nothing wrong and was apparently no threat to others.

Read more »
Email ThisBlogThis!Share to TwitterShare to FacebookShare to Pinterest
Posted by The Editor at 11:28 am 0 comments

Links to this post
Labels: Drugs and prohibition, sniffer dogs

An analysis of crime and arrest statistics by the New York Times shows that Black and Hispanic people are arrested for low-level marijuana offences at rates from six to fifteen times that of white people.
This is despite the number of complaints coming from residents of predominantly black or white districts being about the same.
Even as the drug is legalised in other states, and New York courts increasingly dismiss these charges, the court benches each day are filled with mostly young black or Hispanic men facing low level charges such as smoking in a public area.
The original, evidence-free prohibition of Marijuana has often been ascribed to the Establishment's desire to find a way to target minorities (and jazz musicians, purveyors of "the Devil's music"). It seems not much has changed nearly 100 years later.
This gross waste of public funds takes Police attention away from real crimes – those with actual victims – and seriously damages the lives of the arrested victims.
Police plead that many of the arrests happen because some neighbourhoods have higher overall crime rates than others and are therefore more heavily policed. This defence would seem to have some validity. All the more reason to legalise the stuff and stop this nonsense.

Email ThisBlogThis!Share to TwitterShare to FacebookShare to Pinterest
Posted by The Editor at 9:37 am 0 comments