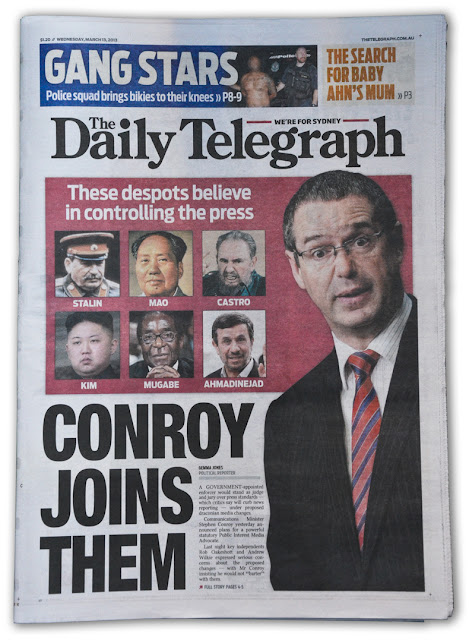 Right here is the main problem with Australian politics. Are Murdoch's readers seriously as stupid as Sydney's Daily Telegraph assumes today? By contrast, Michelle Grattan on 'The Conversation' website gets it about right: "A media policy mouse with a modest roar. That won’t stop the media companies and the opposition treating it as a lion that must be slain." I know where I'd rather get my information.

Tony Abbott and the Liberals are uncannuly in touch with the mentality this nonsense creates and appeals to. They know just how to pitch meaningless but emotive sound-bites to this constituency: "Stop the boats;" "The carbon tax will ruin the economy;" "You can't trust Juliar".

Meanwhile Labor and The Greens labour on under the illusion that actually doing things for the good of the people, or being 'right' matters a damn. Those days are gone, folks. Welcome to the Brave New World.

And so much for the maxim that "The first one to mention the Nazis loses the debate". And using propagandists as fodder for your propaganda is cheeky to say the least.
Email ThisBlogThis!Share to TwitterShare to FacebookShare to Pinterest
Posted by The Editor at 9:18 am 0 comments