Hot on the heels of the latest world drug report from the UN, the XVIII International AIDS Conference in Vienna has published a major Declaration presenting a very different point of view, and an online petition endorsing it. The Declaration, written and supported by leading scientists from all parts of the world, lists and condemns the failures of the War on Drugs and calls on the UN to decriminalise, regulate and scale up treatment for problem users.

The battle between prohibitionists and reformers is at a delicate point, with prohibitionists hosting their own summit events in an attempt to buttress the UN-driven War. However their arguments are sounding ever more stale as they increasingly ignore damning evidence and argument that refutes their position.

Some lines from the Declaration which list consequences of the War on Drugs:

Read more »
Email ThisBlogThis!Share to TwitterShare to FacebookShare to Pinterest
Posted by The Editor at 10:41 am 0 comments

Legal luminary Charles Waterstreet returned to the drug law reform theme in the Sun-Herald/Age over the weekend, criticising sniffer dogs for not catching the "Mr Bigs of Baggies" and for spoiling parties.

And tonight, Foreign Correspondent looks at California's "Germinator", a cannabis breeder who purveys boutique strains of cannabis in the same way that wine-buffs enjoy the varieties and blends of fine wines.

The usual arguments apply, but the Foreign Correspondent blurb runs some arguments from the opposition. It shows up the poverty of prohibitionist argument, each point in the following gush about cannabis being objectively and demonstratively untrue:

Read more »
Email ThisBlogThis!Share to TwitterShare to FacebookShare to Pinterest
Posted by The Editor at 10:17 am 0 comments

Teen arrested as drug use soars 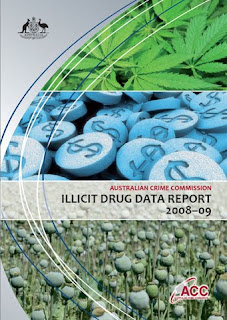 Australian Police seem to be in a bit of a frenzy lately as they fight their War on Drugs.

Yesterday a 14-year-old boy was one of nine people arrested over an ongoing drug supply operation between Sydney and Dubbo.

Police are proud of their bust, offering video and still pics of the arrests to media.

Meanwhile the Australian Crime Commission (ACC) reports that drug seizures have reached record highs (so to speak). The Australian reports "a record number of cocaine arrests and a doubling of heroin seizures in 2008-09 suggests that hard drugs are more readily available."

This is yet more evidence that the decades-old War on Drugs is not working.

But that's not how ACC chief executive John Lawler put it.

"The illicit drug trade feeds drug habits, which in turn leads to more crime in a destructive cycle,'' he said.

Well yes, Mr Lawler, but only because it's illegal and unregulated in the first place, which jacks up the price, creates the super-profits that attract the criminals and makes drugs actually easier to get than alcohol for minors.

Read more »
Email ThisBlogThis!Share to TwitterShare to FacebookShare to Pinterest
Posted by The Editor at 6:26 pm 1 comments

I don't want to say 'I told you so,' but I did. Back on May 26, 2008 I posted a blog about Kevin Rudd being John Howard in disguise, with this undoctored split pic to prove it.

At the time Krudd was still enjoying the honeymoon period of his reign. But I had been reading and analysing Labor policy for some time, and could see they were totally insincere about things such as climate change. One the one hand, in their glossy brochures, they SAID they were 'committed' to addressing it but on the other they were going full-steam-ahead (literally) with coal-fired power and road-based transport.

Now the house of cards has tumbled down. All it took was an opposition leader with cut-through, and continued bad advice to Krudd from his NSW-right advisers.

The government's repeated moral cowardice and backflips have, to their surprise, resulted in a landslide collapse in the opinion polls and The Greens have mopped up the benefit. Now the political discourse, which used to be exclusively about the big two parties, includes The Greens with daily analysis in the major media and even two polls about whether Bob Brown should be included in the next leaders' debate.

The SMH poll was running well into 'yes' territory and Murdoch news was running about 50-50 last time I looked.

With the Lib-Dems sharing power in the UK and The Greens sharing power in Tasmania, The political frame has changed. The traditional two-party power split is unravelling. And Bob Brown is finally capitalising on his steady-as-she-goes media presence, a voice of reason in the maelstrom, someone people would trust to have the balance of power in the Senate.

Krudd's attempts to get out of it with the mining tax has not worked either, because it has stirred up a hornet's nest of well-funded opposition from the miners, yet there was no grassroots popular demand for it in the first place, regardless of whether or not it is a good idea.


Email ThisBlogThis!Share to TwitterShare to FacebookShare to Pinterest
Posted by The Editor at 5:08 pm 2 comments