Well I doubt that truth has ever had much to do with politics but we do seem to be entering a new era of fact-free debate.

Here's a link to an excellent Crickey post that lays it all out, in this case dissecting Australia's boat people hysteria. I like the quote:

I heard two gay guys walking past the front door today, one saying "and then they come to our country and use our own legal system against us". I hope they watch that SBS series screening tonight about people taking the refugee trip in reverse, and somehow read the Crikey post. 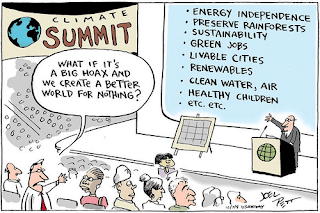 This morning I received an email from a friend who thinks the whole climate change thing is a fraud.  He forwarded a speech by David Evans who is part of the new 'Galileo movement', ie climate sceptics who compare themselves to Galileo who on this very day some centuries ago was forced by the church to recant his view that the earth revolved around the sun. This is a neat inversion of the facts I have researched because these sceptics are the ones using dodgy science, not the other way around.

This technique of inversion is used ruthlessly by aggressive conservatives worldwide and it is winning them a lot of undeserved traction. An example is the current editorials in The Australian claiming it is the fair and unbiased journal despite its declaration last year that it had set out to destroy the Greens - much like Fox News describing itself as 'Fair and balanced'.

Normally I don't bother debating with these types as they simply ignore all the arguments and hold their view. But my friend IS a thinker and a genuine person so I replied. I linked him to some excellent climate science websites that soberly debunk the sceptic claims, and reproduce the thread below. The original David Evans' speech is at the bottom; my response with links at the top.

Read more »
Email ThisBlogThis!Share to TwitterShare to FacebookShare to Pinterest
Posted by The Editor at 12:59 pm 0 comments

Do not be alarmed (or even alert)

This video opinion piece is designed to reassure climate change sceptics that their opinions are really sound. Ostensibly. It's excellent and only four minutes 11 secs. Have a look!

Email ThisBlogThis!Share to TwitterShare to FacebookShare to Pinterest
Posted by The Editor at 2:24 pm 0 comments

The rhetoric of key prohibitionists is being pushed back as the debate about regulated legalisation of drugs develops and receives more balanced media exposure, with US 'Drugs Czar' Gil Kerlikowske, admitting on a government blog that you can't arrest your way out of drug problems.

However he then launches into an almost amusing assertion that his policy of prohibition is science-based, quoting a whole lot of 'associations' between drugs and Bad Things, again based on fallacy as all the Bad Things are either highly disputable or apply to a fraction of one percent of drug users, hardly a reason to criminalise the other 99%.

He then asserts that drug use is not a victimless crime, quoting "the tragic impact drug use has on newborn babies". He links to an article which turns out to be about prescription drugs, not illicit drugs, a sly twist that typifies prohibitionist rhetoric.

But it convinces some of the ignorant, so truth becomes secondary to convenience. It apparently has not occurred to Mr Kerlikowske that, as men don't have babies, the cohort so affected would be cut by yet another 50%. Nor are drugs like cannabis or MDMA addictive in any real sense so his baby argument fails to justify the prohibition of those drugs.

But the tricky part is his implication that all drug use (not abuse) creates victims. His wording is revealing and typical of prohibitionist propaganda.

On top of that, all the Bad Things he quotes are happening in a country with one of the toughest prohibition regimes among western countries, so, prima facie, prohibition is not working.

Mr Kerlikowske also asserts that "legalising illicit drugs increase drug use" (sic) but provides no evidence for this, ignoring the fact that more Americans use more drugs than most countries despite his precious prohibition.

If he admits you can't arrest your way out of dug problems, how else would his prohibition work? It's self-contradictory.

It's remarkable that such a senior government official can produce this nonsense with a straight face.

Email ThisBlogThis!Share to TwitterShare to FacebookShare to Pinterest
Posted by The Editor at 2:44 pm 2 comments

A whack at climate change sceptics

The SMH published a letter from me today - always nice. It's on climate change and is the first one after all the Penny Wong 'miaow' letters, although at 4.23am the headline is placed after the letter on the website!

Text of letter as published:


Two severe weather events helped tip our economy into the worst contraction since 1991 (''Mining slide drags down the economy'', June 2). Whether or not these natural disasters are linked to human-induced climate change, more severe weather is exactly what scientists predict as a result of global warming.
Maybe now climate sceptics will comprehend the massive economic costs we risk if we fail to address the problem. These would make the price of a carbon tax look like child's play.

Michael Gormly Woolloomooloo
Email ThisBlogThis!Share to TwitterShare to FacebookShare to Pinterest
Posted by The Editor at 4:28 am 0 comments

Culture jam of the year

Have to pay these people who stopped a football match in Italy with their anti-nuclear banner. The impotence of the authorities to act is quite funny. Italy is about to to the polls to vote on a resumption of nuclear power generation in the country. Note the applause from the crowd.

Email ThisBlogThis!Share to TwitterShare to FacebookShare to Pinterest
Posted by The Editor at 9:29 am 0 comments