With the 'Bali Two' facing likely execution in Indonesia, a politically threatened government is quoting "50 deaths per day because of drugs" to justify their populist decision to execute all convicted drug dealers including the Australians.

But the "50 deaths per day" is a rubbery extrapolation based, it seems, on only three (3) reports by other people that someone they knew "died because of drugs". This is not evidence in any accepted sense of the word.

Yes we know that drugs can be problematic for a very small minority of users but you will always find that these unfortunate people have other serious problems in their lives, so it's a bit facile to simply blame the drugs. It's also facile to think that prohibition stops the problems - in fact it causes most of them, as per the below billboard erected by former US drug police who have the courage to tell the truth. 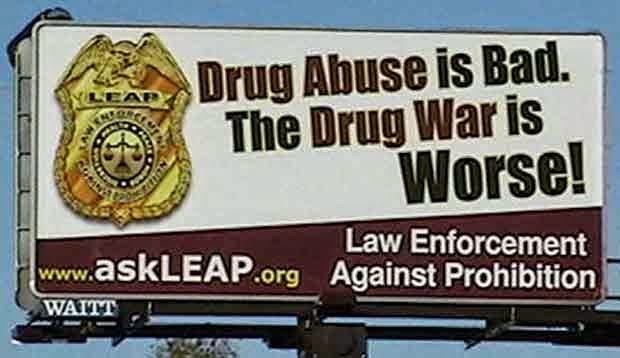 Email ThisBlogThis!Share to TwitterShare to FacebookShare to Pinterest
Posted by The Editor at 10:35 am 0 comments


"Drivers who use marijuana are at a significantly lower risk of being in a crash than drivers who use alcohol, a new study from the US National Highway Traffic Safety Administration shows.


"And after adjusting for age, gender, race and alcohol use, drivers who tested positive for marijuana were no more likely to crash than those who had not used any drugs or alcohol prior to driving, it found."
Still the demonisation continues, with Hunter region police regularly in the media reporting apparently shocking results when they do roadside drug test blitzes - with 30%-40% of drivers showing positive to cannabis. This sort of scare tactic means penalties for drug driving are at least equal to those for drunk driving. Not only is this stupid and unfair but the huge state budget allocated to its enforcement is simply a waste. However this massive budget might provide a clue why police are so keen to continue their scare campaign.

http://www.smh.com.au/world/stoned-drivers-are-a-lot-safer-than-drunk-ones-official-us-data-shows-20150209-13a7n0.html
Email ThisBlogThis!Share to TwitterShare to FacebookShare to Pinterest
Posted by The Editor at 12:13 pm 0 comments