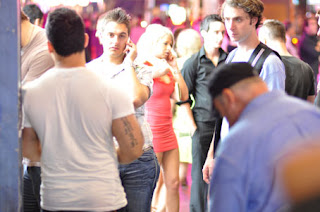 A lovely piece on Kings Cross appears in The Sydney Morning Herald today. Dugald Jellie writes of the suburb's starring role in the coming third series of Underbelly:

...a dissolute cast of strippers, gamblers, gunmen, hookers, dealers, bouncers, bagmen and boys in blue who ran the fabled red-light district in the days before the 1995 Wood Royal Commission.

This crossroads of debauchery – a place of shoot-outs, bright lights, ceaseless parties and all too many sordid nights to remember and mornings to forget – never has strayed too far from the headlines. Chk chk boom!


A cocky, callous place,” was how writer George Johnston long ago summarised this capital of deviance. He thought it an “awkward masquerade”; a strip with “misfitting foreigners about and odd eccentrics, [where] a raffishness has persisted, and it is better than Melbourne and better than the rest of Sydney”.


All of which strikes me as pretty true, and puts the lie to a few locals who write to newspapers claiming that The Cross used to be a "genteel" place "but now it's gotten worse" and the place should therefore be regulated into suburban blandness.

In fact the place is now tamer than it has been for nearly a century, even as Clover Moore, the Police and the State Government intensify their purse-mouthed War against Kings Cross with road closures, selective laws against licensed premises, sniffer dogs and anti-cluster rules designed to remove adult entertainment from the strip. Clover Moore in particular seems obsessed with turning it into "a mother-and-child-friendly shopping precinct" -- like every other suburb of Sydney. Don't these people realise there is a fringe of individuals and eccentrics who do not fit into suburbia, and we have a right to just one district that's different? Gentrification is death.

Pictured: Kings Cross last Saturday night – the testosterone swirls around Dugald Jellie’s "more bare legs than a man ought reasonably expect" as Sydney's youth in their thousands conduct their mating rituals. If only a few old locals hadn't lost their sense of humour and zest for life.
Email ThisBlogThis!Share to TwitterShare to FacebookShare to Pinterest
Posted by The Editor at 10:28 am

Thanks for the post.
At first when I was reading the post I was thinking, "Gosh, that seems like the places I used to hang out." There was certainly an appeal to those places.
The problem with gentrification is that it just pushes that 'activity' to another area. there is a NIMBY attitude. Not in my back yard.