Another climate sceptic mantra blown out of the water 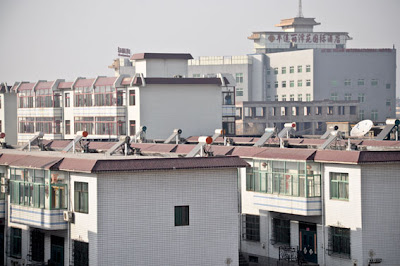 A letter of mine published in the SMH today makes a small contribution to the climate change debate, noting that Tony Abbot would be "talking to industry" about penalties on industry for increasing carbon emissions. Comforting. It's like the judge asking a criminal what sentence they would like.

Wright documents many cases where renewable energy IS already providing 'baseload power' in other countries on a scale similar to our own dirty coal-fired power stations. Much of it uses technology developed in Australia but activated overseas because our government will not support the industry here. As Wright points out, our coal-fired plants were developed with public subsidy, so the argument that renewables cost more is also compromised -- never mind that wind and sunlight are free and inexhaustible. These industries overseas employ similar numbers to our coal-based system, so the jobs argument raised by sceptics is also false.

As one commenter pointed out, noting that we have far more sunlight than any of these countries "We could be the Saudi Arabia of solar thermal instead of the saudi arabia of coal and uranium."

Wright's report lands some heavy blows on the nuclear lobby, too:

"Compared to the 10 years it takes to get a nuclear plant up and running, solar thermal plants with 24-hour baseload capacity have construction times as short as nine months."

The report also backs up my position in reports I published in The City News based on my street-level observations of renewable energy I saw installed in China over the summer break. Solar hot water systems were everywhere, a glaring difference between Chinese and Australian roofscapes. I saw many residential developments (like the one pictured, in Pingyao) which were low-rise, offering plenty of roof space to install the units. Our high-rise model, I suspect, houses no more people per hectare but locks out the solar hot water option. I priced a household solar unit in Dali (a quote that took about 15 seconds with no common language involved except sign language and a calculator!) at around $400. Wright puts the price at "Under $500." The technology was invented in Australia, so why are we charged several times this price? Are you there, Kevin Rudd?

No, he's not. All the above has been endlessly broadcast by The Greens, those "irresponsible radicals". It's time the media stopped focusing on the meaningless Liberal/Labor debate and got real by comparing  those farcical deceptions to Greens' policies that are already reality in other more progressive countries.

Links to previous China Postcards in The City News: Drop the red Lanterns, It's the small things that add up.
Email ThisBlogThis!Share to TwitterShare to FacebookShare to Pinterest
Posted by The Editor at 9:55 am