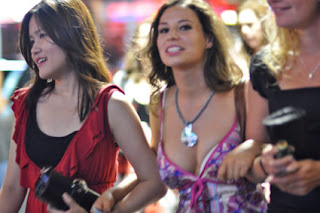 The Underbelly-inspired avalanche of television, books and museum exhibits about Kings Cross sits in strange contrast to the ongoing War on Kings Cross being waged by Council, the State Government and a few local NIMBYs (Not In My Back Yard).

Latest is an exhibition in the Police and Justice Museum, Sin City, described today by Michael Duffy in the SMH. with a few juicy quotes from a new book by former High Court Judge Michael Kirby. Interestingly, 71 people were reading it when I logged on. By contrast, nobody else was reading about an art exhibition by visiting rocker Niagara, and only eight people were reading about indigenous students being six years behind other school students in literacy and numeracy.

People seem to love life in the fast lane up the Cross, but you'd never know it from the moralistic rhetoric coming from police and City of Sydney councillors.

Ever was it thus, I suppose, going back to our convict origins. What bemuses me is why the partying masses tolerate the nanny-state attitude of the authorities. My theory is that it's all rooted in Catholic-type guilt as the sinners tug their forelock and say "Sorry, Your Honour, I know I did wrong but I can't help myself". They promise not to do it again -- at least until the next weekend rolls around.

My other theory is that the more our society is oppressed by nannyism, the more people will behave like children instead of adults, so the ever-increasing regulation reduces the personal responsibility of the governed class and the problem just keeps spiralling.

Pic: Some of the thousands of partygoers still flocking to Kings Cross. What chance do sour old Councillors have in combating the joie de vivre of Sydney's gorgeous youngsters?
Email ThisBlogThis!Share to TwitterShare to FacebookShare to Pinterest
Posted by The Editor at 10:48 am

I think your last sentence says it. I reckon the hordes of party goers tolerate the nanny state because they don't care too much about the miserable, the mean and the angry - they are too busy having a good time. The joyless nanny state is single-mindedly obsessed with everything that is bad - what a way to think!

... and a lot of things they obsess about aren't even bad, just things that they personally cannot tolerate. It never occurs to them that the problem might be their own tolerance levels and they have such a huge sense of self-entitlement they go all out to crush the 'problem' with NO regard for other people's needs or pleasures.

They get older and crustier and less tolerant but they blame external circumstances, claiming with little valid evidence that "things are getting worse".