Proof that prohibition has failed 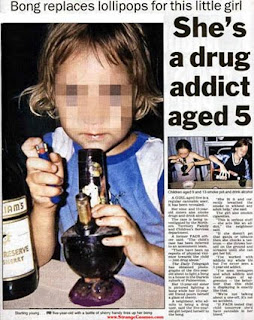 While many people think this story from the Murdoch stable is a fit-up, I am not surprised that some parents might be so stupid as to let this happen. (See full text below. Note the April 1 dateline, and that NT welfare authorities do no corroborate it.)
If the story is true, it's proof that prohibition has failed. Unfortunately the prohibitionist frame of reference that most Australian media inhabit means this story will be generally interpreted the opposite way -- that we need an even tougher 'War on Drugs'.


I suspect that even under strictly regulated legalisation, you couldn't stop this degree of parental failure. It's child abuse.
The nonsense in the story about 'addiction' to this non-addictive drug absolutely condemns it to beat-up status. The child is said to throw a tantrum if she is denied cannabis, tobacco (which is of course addictive) or alcohol. But kids throw a tantrum if they are denied a piece of chocolate cake, too. It just means they are spoiled.

The real danger to the child is that drug use at such an early age might rewire the way her immature brain develops. But keep it in perspective -- few parents blink an eye when kids are prescribed Ritalin etc, a huge and controversial trend.
And ninety-something percent of cannabis users never have any serious problems with it, yet the War on Drugs is a war on all users.
More perspective, from online discussion about this story:

5% of all deaths from diseases of the circulatory system are attributed to alcohol.

15% of all deaths from diseases of the respiratory system are attributed to alcohol.

30% of all deaths from accidents caused by fire and flames are attributed to alcohol.

30% of all accidental drownings are attributed to alcohol.

30% of all suicides are attributed to alcohol.

40% of all deaths due to accidental falls are attributed to alcohol.

45% of all deaths in automobile accidents are attributed to alcohol.

60% of all homicides are attributed to alcohol.

Total Recorded Deaths Caused By The Use Of Cannabis: 0.

A FIVE-year-old Northern Territory girl has been smoking cannabis, it was learned last night.

A nine-year-old and a 13-year-old also smoke drugs and drink alcohol.

The case is being investigated by Family and Children's Services.

The department last night refused to confirm an inquiry was under way.

But a former FACS officer said: "The child's case has been referred to an assessment team to follow up.

"There have been no reports of physical violence towards the child - just drug abuse."

The Northern Territory News has obtained photographs that show the five-year-old girl preparing to light a bong in a house in Palmerston.

A 13-year-old is pictured lighting a bong while her 13-year-old friend pours herself a glass of sherry.

The neighbour, who admits to being a drug user, said the five-year-old girl helped herself to the bong.

"She lit it and correctly breathed the smoke in without any adult help," the woman said.

"This is serious stuff - she acts like an addict," the neighbour said. "If she doesn't get that ganja or tobacco then she chucks a tantrum - she throws herself on the ground and screams until she can get her hit.

"I've seen teenagers and adult addicts and their stages of aggression - the behaviour that this child is displaying is exactly like that.

"We're not talking about a one-off, it's not an accident.

"If FACS tested that child tomorrow she'd have THC in her blood."

Health Department spokeswoman Bernadette Keefe said last night: "If there is evidence of a five-year-old involved in drug use we would be immediately concerned and take action.

"But that is not the information we have received." But when asked what information the department had received, Ms Keefe said: "I can't comment on that."

- Northern Territory News
Email ThisBlogThis!Share to TwitterShare to FacebookShare to Pinterest
Posted by The Editor at 5:51 pm