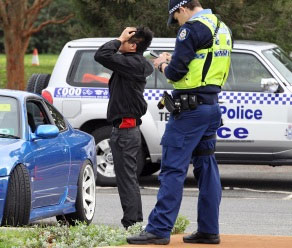 WA police are using number plate scanning to identify drivers with previous drug convictions, pulling them over, searching their cars and testing their saliva, reports The West Australian.

In a recent trial 4,000 cars were pulled over and four people were found in possession of drugs. Another 18 drivers were either unlicensed or were driving unregistered vehicles - and I have no problem with this as the scanning revealed an offence being committed, and one that potentially created danger to others.

But searching people because they have a prior drug conviction is wrong for two reasons.

First, having a prior conviction is clearly not the grounds for suspicion normally required to justify a search. Presumably the convicted person has paid their 'debt to society' and should be treated with the rights of a normal person. This is why prior convictions are not revealed to juries in a trial until after a verdict has been reached.

Second, targeting people who have been found guilty of a crime which is not only victimless but in the opinion of many should not even be a crime, is a strange priority. If you were serious about using this technology to protect the community, why not pull over convicted drunk drivers, pedophiles, murderers, thieves and hitmen?

No, it's another example of the obsessive anti-drug ideology driving the WA Liberals government into a systematic campaign of social persecution.

As there is not a single valid argument for prohibition, persecuting a sub-culture in its name is pernicious.
Email ThisBlogThis!Share to TwitterShare to FacebookShare to Pinterest
Posted by The Editor at 9:16 am