There was a petition on the bar of my local against the NSW government's recent early lockout laws. I signed it. While I have been railing for years against this moral panic-driven nonsense, this piece by Bernard Keane on Crickey unpicks the hypocrisy of the laws and the media campaign behind it, particularly the shameful behaviour of the formerly trustworthy Sydney Morning Herald.

The piece is less than complimentary about media tart Dr Gordian Fulde from St Vincents Hospital, a doctrinaire prohibitionist who in my view should stick to his doctoring and keep his doctrines out of public commentary.


Fulde is insistent that violence is getting worse in Sydney and that alcohol is to blame. It is a claim that the Herald was happy to repeat. It is also a claim that is blatantly false... Last year’s Review of the Liquor Act 2007and Gaming and Liquor Administration Act 2007 showed that violent incidents on licensed premises had fallen 28% from 2007, and alcohol-related assaults had fallen 35% between 2008 and 2012. Assaults across NSW had also fallen significantly, as had hospital presentations for acute alcohol-related problems.
And for those who believe that review was a Big Grog conspiracy, you can go to the NSW Bureau of Crime Statistics and Research site and look at the data yourself.

Here are the relevant data: 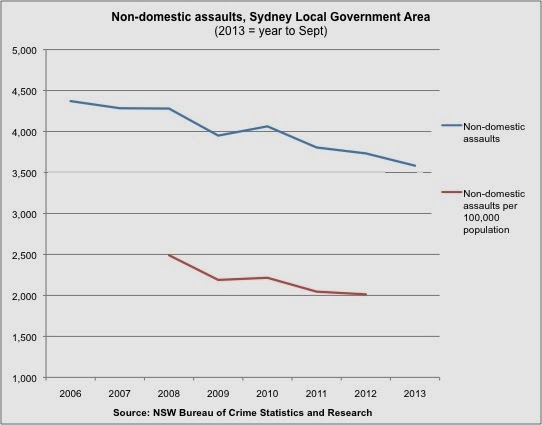 Keane again hits the nail on the head, ascribing the cheap populist campaign run by Sydney's newspapers to their plummetting circulation:


This takes us to the most relevant statistics about this whole sordid affair. The Sydney Morning Herald’s circulation is in freefall — it lost more than 15% of its circulation in the year to September. And in 2013, it fell 7 points in its readers’ trust, according to Essential Research’s trust in media survey, tumbling to 64%. The Telegraph is Australia’s least-trusted metro title — trusted by only 41% of its readers — and its circulation fell by nearly as much as the Herald’s in the year to September. They are two dying newspapers, each desperate to outdo the other.

The lockout laws so-far seem to be killing the Cross, which might please a few local NIMBYs but will cause hardship to all the hospitality workers and entertainers now thrown out of work.
Email ThisBlogThis!Share to TwitterShare to FacebookShare to Pinterest
Posted by The Editor at 9:48 am