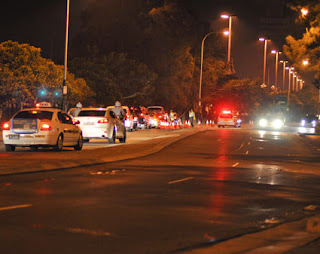 My comments in The City News on police blockades of Macleay Street on Friday and Saturday nights have drawn a number of angry emails from supporters of the scheme. In reply to my contention that blockading one area only shunts the noise to other residential areas, several of them have said the other areas should also be blockaded.

The comment below is a fair (and polite!) summary of their position:

My reply to Ms Westmeyer is also below.

On the City News site...

I couldn’t agree more that Macleay St residents should not be enjoying noise-free nights “while others cop the overflow”. The fact of the matter is NO RESIDENTS should be made or expected to tolerate the level of noise, disruption and anti-social behaviour which we have for so long campaigned for individually and via various residents’ groups, ad nauseum. So the hoons and late night revelers will have to also be moved on from wherever their detour now takes them. And so it goes until they get the message that they are not wanted in anyone’s neighbourhood. Mr Gormly’s comment about “the city’s role as a destination for work and entertainment” is incomplete. Cities, and in particular this most densely populated area of Australia, is also for living which not unreasonably includes a decent night’s sleep. And ‘entertainment’ also means things other than too much alcohol, drugs and general sleaze which is about all Kings Cross offers can currently offer the local community. So the bottom line about traffic diversion is that it is merely a symptom of very much bigger, generic and pathologic issues to do with Kings Cross.

Rebecca neatly sums up the NIMBY position, confirmed by other campaigners who have angrily emailed me — they want to effectively blockade Kings Cross (and maybe the whole city) from suburban visitors who come here for entertainment. They postulate a global city with no entertainment precinct, a dull, economically depressing prospect that horrifies the majority of us who intelligently moved here because we actually want to live in the entertainment precinct.

The very definition of a city is “a destination for work and entertainment”. Just because a small minority of us choose to live in the city does not alter that. Sure, find ways to mitigate problems without killing the party, but to simply gate off the city is arrogant and absurd.

The NIMBYs don’t agree with this, but that’s because their sense of self-entitlement knows no bounds. They seriously propose that taxpayers’ dollars be permanently sunk into a weekend blockade of the whole of Kings Cross (and wherever else the party goes) to exclude the very people who pay most of those tax dollars. I think the police have better things to do that serve privileged elites.

Ms Westmeyer faithfully uses the language this well organised minority have evolved to present its position.  Note the moral panic intrinsic to the portrayal of our party precinct  as "too much alcohol, drugs and general sleaze" -- it's even "pathologic". These people always protest the noise etc they are "expected" to tolerate. But no-one "expects" them to tolerate it -- they simply chose to move into an area that doesn't suit their tolerance levels. They could always have moved to Pymble, or even just a few streets away where it's not so noisy. It's a similar issue in Lane Cove where privileged waterfront landowners are trying to get fishing banned from the public wharves because of the noise.

Photo: The Macleay St blockade in place on the weekend of 22/11/09 at 12.36 am. Supporters advocate this for all roads into Kings Cross. What do you think?

PS (5 December) I have learned that Council is taking over the Macleay St closures for another three months, paying the same commercial operators they pay to protect the rich people in Walsh Bay at The Rocks. Aren't you glad your rates and taxes are being spent on behalf of privileged NIMBYs? I am disgusted -- it shows our over-wealthy society has lost all vestiges of egalitarianism and a fair go for all.

Ms Westmeyer will be pleased, though.

Email ThisBlogThis!Share to TwitterShare to FacebookShare to Pinterest
Posted by The Editor at 10:32 am