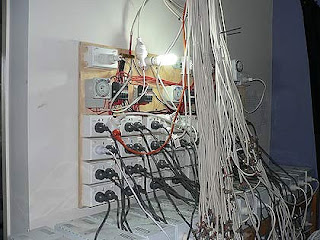 I always feel sad when I hear police on morning radio congratulating their peers on another bust of an indoor cannabis grower.

This week it was a 74-year-old man caught growing 162 cannabis plants in a house in Minto. He was remanded in custody, set to face a major charge and probably a long jail term.

I was sad because he had done nothing worse than a brewery worker, because cannabis is safer than alcohol by any objective measure, and fuels far less social damage than its violence-inducing cousin.

His worst crime may have been simple greed. Or 'ambition' as it's called in the big end of town.

But according to a report in today's SMH, the panic about indoor growing has moved to the sparkies who rig up the grow-rooms, often stealing power from the grid (which presumably the rest of us pay for -- another cost of prohibition).


Police say many of the power systems were built by the same sparky, and a complex plug system and spaghetti loom is pictured (above).

Police reports of the value and amount of the cannabis they confiscate illustrate the stupendous profits made possible by prohibition.

The annual number value of busted plants in NSW is reported as:
Bear in mind that this represents only the plants they found -- while cannabis remains available in every town and high school. Presumably this is only the tip of the iceberg. 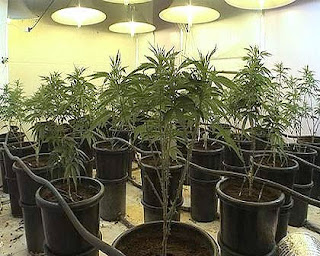 Eight million dollars from one year's cropping? Sheesh, no wonder new growers pop up faster than old ones are caught.
The story then lists ways people can spot a crop-house next door, encouraging the ignorant to dob in their ambitious but harmless neighbours.
Mind you, if cannabis was legal, regulated and taxed, this illicit market would wither and the stuff could be grown outdoors, chemical-free and without the power theft.  Or in commercial indoor operations -- like the four factories now approved for medical marihuana in Oakland California. These are set to earn local authorities $211,000 each in permits, plus a permanent tax stream, and employ hundreds of people, according to an LA Times report.
That system would also keep 74-year-old victims of a stupid War on Drugs out of jail.
Email ThisBlogThis!Share to TwitterShare to FacebookShare to Pinterest
Posted by The Editor at 12:13 pm

Labels: Drugs and prohibition, the language of spin