Who still believes the prohibition myth?

That's the title of my story in the latest edition of The Hub, summarising some of the themes of this blog. A change of layout plans meant it was significantly subbed down from 700+ words and published without the pic I supplied. So just for the record, herewith is the original story and the pic.

Take a ‘worst-case’ scenario in the War on Drugs – a key methamphetamine cook for a NSW bikie gang was busted on major supply charges and sentenced to 55 years in jail.
Like Pavlov’s dogs, most Australians would react on instinct: “Good, that’s one evil person locked up out of the way.”
But even in the case of drugs like ice, in reality this man has done no more harm than a publican who sells alcohol. If the ice-man’s drugs had been abused to trigger a psychotic episode or a fatal overdose, it was the customer who bought and abused the drugs. And even then, blaming the drug for the behaviour of the abuser – shooting up for days on end with no sleep or food until the body’s circuits burn out – misses the point because there are always other social reasons for such self-abuse.
Our publican is not held responsible if someone buys two bottles of vodka, skols them and dies from alcohol poisoning.
Yet such is the power of the prohibition myth that this double standard is all but invisible to our big media and its consumers. One wholesaler gets 55 years jail, more years than murderers, rapists and child molesters get, while our publican is a jolly purveyor making a small fortune from society’s only legal social relaxant, boosted by a healthy income from poker machines.
If this comparison challenges your world-view, you too have been taken in by an organised bombardment of outright lies, junk science and sustained propaganda that began in the US when it banned cannabis in 1937.
That ban followed the failure of alcohol prohibition which had triggered a massive rise in murder and violence, killing many consumers with rotgut alcohol and introducing more women to drink in unregulated and unsegregated speakeasies.
The well-known atrocities of Al Capone and his gang from that era are mirrored in Sydney today in Underbelly-style executions and bikie wars, yet only rarely will big media connect such mayhem with prohibition, a policy which makes possible a $12 billion illicit drug trade annually in Australia alone (as estimated by the Australian Crime Commission).
Legalising, regulating and taxing popular illicit drugs would deny huge criminal gangs a product to sell. It would also reduce harms because people’s drugs would be regulated and pure, available through outlets that screened minors and perhaps through a medically supervised prescription system for harder drugs. Fewer people would binge-drink because more pleasurable alternatives would be legally available, and normalised prices would reduce the need of addicts to beg, steal and mug for their drug money.
If the prospect of legal drugs still alarms you, it means prohibition propaganda is still working. Perhaps you fear “an explosion of drug use”, our streets crowded with ice-psychos, dazed 12-year-old stoners and heroin users falling out of doorways unconscious with a fit stuck in their arm.
What nonsense. If heroin was legally available on prescription, would you start sticking syringes in your arm? Of course not. Would you start bringing your pot into work and getting stoned in the toilets? Well you can now, because cannabis is easily obtainable, but you don’t.
While Australia remains in the stone-age of prohibition discourse, Portugal in 2001 decriminalised all drugs including the hard ones. A recent study by free market think tank The Cato Institute found that overall drug use is down, cannabis use among young people has dropped and HIV transmission was nearly halved.
Prohibitionists will reply with isolated statistical factoids, for example highlighting a sharp rise in use when Alaska legalised personal cannabis in the mid-1970s.
But a five-minute web search shows that cannabis use also rose in the strictly prohibitionist states over the same period. Similarly, cannabis use globally tends to be highest in the countries that persecute its use, like the US and Australia, whereas liberal nations like the Netherlands show much lower usage rates. Even Republican soccer mom Sarah Palin says police have better things to do than persecute people smoking a quiet joint at home.
But here in Sydney our nights out are routinely spoiled by gangs of police with sniffer dogs trawling pubs and clubs, semi-strip-searching hundreds of victims each week, by far the majority of whom have no drugs.
The sad thing is, too many young people are growing up thinking this police-state is normal and acceptable, while drugs remain easily available in every town and high school. Prohibition has failed.
Caption: Police trawl train travellers with sniffer dogs at Kings Cross Station, supposedly looking for major drug dealers - who never travel by train 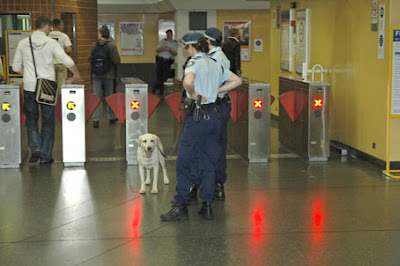 Email ThisBlogThis!Share to TwitterShare to FacebookShare to Pinterest
Posted by The Editor at 10:49 am