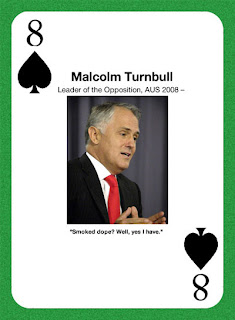 A virtual deck of playing cards showing hypocritical politicians who have used drugs but still support prohibition is the latest chapter in the 'Nice people take drugs' campaign from UK charity Release. While George Bush is the joker, our local MP Malcolm Turnbull, and Tony Abbott, get a mention. The best quote comes from US hardline conservative Newt Gingrich who reportedly said:

When I smoked pot it was illegal but not immoral. Now it is illegal and immoral. The law didn't change, only the morality. That's why you get to go to jail and I don't.

Just goes to show people can rationalise anything.
The other side of politics is included as well, with Bill Clinton and Al Gore in the deck.
Viewers can nominate their own hypocrites to add to the deck.
Email ThisBlogThis!Share to TwitterShare to FacebookShare to Pinterest
Posted by The Editor at 10:31 am