Cameras roll for re-run of Jazz@Joes 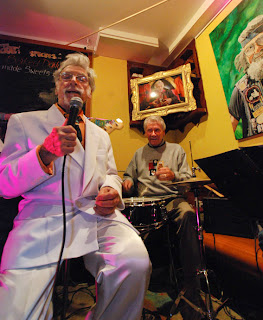 Jazz@Joes earlier this month was such a success that an ABC documentary crew are paying the band to do a rerun for the cameras as part of a doco they are shooting about the Abe Saffron days of Kings Cross.
Seats are limited to make room for the cameras in the small venue so if you want to be a part of Kings Cross History, book now!
Edwin Duff will again lead the David Smith Trio plus there will be a special recording of Edwin's song Heartbeat of Sydney. Despite winning competitions and being written by a local, the song has always played second fiddle to My City of Sydney (which, desperate for a rhyme, talks about non-existent church steeples in Woolloomooloo).
It's $30 which gets you a three-course dinner. BYO @ $2.00 corkage per bottle -- there's a good bottleshop a few doors away. Bookings via John Redmond on 0420 711 273 or at the Café on 9368 1188. Starts at 7.30pm, Monday 22 June. It's at 190 Victoria Street Kings Cross.
Picture: Edwin at the last show with Bob Gillespie on drum in the background
Email ThisBlogThis!Share to TwitterShare to FacebookShare to Pinterest
Posted by The Editor at 3:54 pm