Pubs bite the dust as nanny Clover cracks the whip 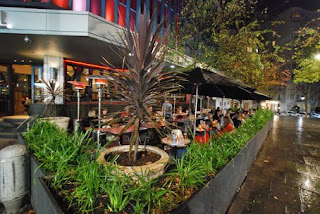 There was no need for Clover Moore to concoct rubbery research to support the notion that pubs had reached saturation point in Kings Cross. As a DINK (double income no kids) who still can't afford the high-flying cocktail circuit, I have been pointing out for some years that there must be a limit to how many venues can spend millions on renovations and then rely on the top end of the nightclub set to pay a fortune for drinks in return for the questionable benefit of being seen in the 'right' places.
Yesterday's Daily Telegraph documents the fall of several pub empires, telling how the beer barons bought, borrowed and renovated at the top of the market only to be hit by the recession and a new raft of expensive regulations starting with the smoking ban and continued by anti-alcohol campaigners.
But it's not even a recent phenomenon. First to fall in Kings Cross was the $9 million conversion of the raunchy Bourbon and Beefsteak to the beige-and-pebblecrete Bourbon. The Bourbon began as a top-end venue, proudly refusing even to advertise. All these places flourish for some months or until the next flashy joint finishes ITS renovation, and all the social butterflies flit off to whatever place is in the social pages with pictures of off-duty footie stars and other minor celebs.
Soon enough, The Bourbon started dropping its prices, with $10 steaks on the slow days. Then it hit the financial wall and was, I am variously told, bought out by ING or Woolworths. Now it offers $10 steaks every day along with $3 beer, wines and basic spirits from 6pm-9pm. At that price even I now patronise the place -- the position of its outdoor seating in front of the Fountain is world-class and the acoustics inside are better damped, less shrill than other venues such as The Sugarmill and the Kings Cross Hotel. And the steak is consistently better than most.
Some say it's a price war aimed at wiping out the opposition. If so, it's working. The Bourbon remains pretty full, with a lot of local support, while opposition such as the stunning Madame DeBiers (formerly the Commonwealth Bank) has now closed, never having clicked with the fashionistas. I hear The Kings Cross Hotel is also on the ropes. Springfields, now The Elk, owned by the owners of the Empire, never filled up and the more publike Elk seems also to be struggling. The Vegas, after its own renovation, then bought The Mansions just when its poker machine income dived from first in NSW to somewhere deep down the league table. That pub group has now hit the wall.
My local bottleshop, which has two outlets in Kings Cross and several in other Sydney suburbs, reports that sales are plummeting -- not only from the public but from several local clubs they supply. They have been laying off shifts for some time now.
The Chifley is closed for three months while developer Australand remedies a pandemic of building defects.
But anti-pub fundamentalists bang on as if world war three was being played out in the streets of the Cross each night, creating the spectre of 'out-of-control violence' and other hyperbole, while Clover Moore and credulous Councillors accept their ravings as fact and respond with ever-tougher regulation.
I have little sympathy with pub owners, who have shown themselves on the whole to be shallow and stupid.
But my heart breaks to see Kings Cross bashed into a mere shadow of what it could be, making Sydney all the poorer and duller.
Pictured is the ever-decreasingly patronised Sugarmill outdoor area, subject to an organised resident campaign bringing tough new restrictions that threaten to make it, too unviable. Then watch residents' chortles of triumph turn to screams as the junkies return...
Email ThisBlogThis!Share to TwitterShare to FacebookShare to Pinterest
Posted by The Editor at 9:37 am

Labels: The War on Kings Cross

Madame de Biers closing is disappointing. It was a great fitout, the pizzas were good and they were bringing live music back to the X. They tried to style themselves as a sort of sorts bar and attract the backpacker market but drink prices were way too high.

Club Swans has a good mix of moderate priced decent food (as distinct from snacks) and cheap beer and wine.

But the cross is forever a changing scene.
DC became the new Lincoln
The new DC just closed and reopened as TheClub (nightclub) without removing the pole.
Storrier Hotel lasted six months and is now serviced apartments.
Barons closed but up has popped a very interesting building.

It's just so disappointing, that Sugarmill, which as you say cleared that pedestrian mall is being forced to roll back. They're soooo stupid!

Bugger - I wished I'd known Madam de Biers was any good. From the outside it did nothing to convince me it was anything other than a VB and pokies barn. What a shame.

I'm not surprised the KX Hotel isn't popular - its fitout is particularly uninviting and looks as if it has been designed to be hosed out rather than offer any level of conviviality.

I see the Elk outdoor license is up for renewal again and suspect it will go the same way as the Sugarmill. These two venues offered the only semblance of a garden and some sophistication on Darlinghurst Rd and they are both well run and a big improvement to the Plaza - and the Cross. I'd think that the reason for Sugarmill's popularity was because of the outdoor garden/dining and wonder if it will survive otherwise.

It seems that small but vocal group of residents won't be satisfied until the Plaza is cold and barren again and permanent home to the junkies as it was pre Sugarmill and Elk.

Agree about the KX Hotel. It was more or less designed by the builder and while it has some excellent features upstairs it lacks a coherent concept. Downstairs it is just noisy & beige. The interior should have matched the beautifully restored exterior. They should have gone for Federation decor IMO.