War on Drugs killing more people than the drugs 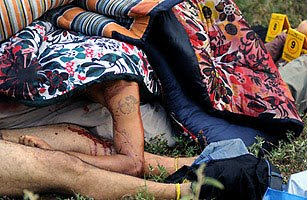 The assassination and mutilation of 12 Federal Police in Mexico by a Jesus-worshipping drug cartel continues the spiralling violence which is this generation's version of the gangster wars that broke out in the US under prohibition of alcohol. Read about the violence in Time Magazine.
While profits from prohibited drugs enable La Familia Michoacana to pay their members ten times the average Mexican wage, there seems little hope of moralistic messages and government military action curbing the problem. Ironically the drugs are mostly consumed in the US, origin of the War on Drugs.
Meanwhile cannabis (the main stock-in-trade of the cartels along with cocaine ) has never killed anyone.
The Australian media have been reporting this Mexican horror but never mention the mammoth in the room, prohibition. I'll single out the ABC and The Sydney Morning Herald as they constitute most of my traditional media diet. It's a great example of how 'objective' reporting can be deeply misleading by limiting itself to a narrow frame of reference or mindset.
It's the same with the 'bikie wars' in Sydney. The media never admit that prohibition creates the fertile ground in which such criminal problems always flourish. But they do report politicians getting hairy-chested as they promise to get tough on the bikies, reinforcing the mindset that the answer to the failure of prohibition is always more prohibition.
Pictured are bodies beheaded by another Mexican drug cartel, Zeta. I wonder if prohibitionists would be happy to fund research into the impact of such murders on the victim's families -- to balance the money they are spending on researching the impact of drugs on families as they try to demonise personal drug use. They won't, because prohibitionist politics is essentially dishonest. Nor will prohibitionists take any responsibility for the carnage in Mexico. After all, it's not white people dying for this western cause, is it?
PS Actually, white people are dying too. Here's video of US Police killing a guy who was trying to swallow a small bag of white powder. They didn't break his neck, only fractured his hyoid bone.
Said the Chief Deputy in defense of his officer: "He wasn't trying to choke him, he was trying to stop him from swallowing evidence which could potentially kill him." Hmmn.
Email ThisBlogThis!Share to TwitterShare to FacebookShare to Pinterest
Posted by The Editor at 9:22 am