Are we driving Sydney to drink? 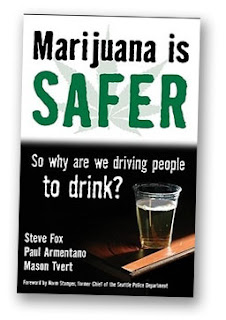 With Sydney, and Kings Cross in particular, consumed by a battle over booze, a new book published in the US approaches the issue from a wider perspective.
Marijuana is Safer: so why are we driving Americans to drink echoes our local situation. But here, the public discourse ignores the nexus between the two most popular recreational drugs. The alcohol debate ignores cannabis, because you can't be seen to support such a terrible, dangerous, irresponsible thing.
But as the book shows, cannabis is a lot less dangerous than alcohol in every way, making its prohibition anomalous. Yet I have watched the recreational landscapes of Kings Cross and Oxford street change during several years of the sniffer dog blitz. These dogs mainly find cannabis and ecstasy -- the two least harmful drugs -- and police often publicly search up to 100 people a week, arresting or cautioning a few and confiscating their drugs.
It stands to reason that the 'tribes' targeted by this blitz will move elsewhere and/or change their behaviour. Has the blitz accelerated the flight of gay culture from Oxford Street? Is it therefore partly responsible for the vacuum being filled by straight suburbans who drink more and are more violent? I know for a fact that aware locals no longer carry drugs when they go out. It's too risky. Word quickly gets around the backpacker set, many of whom can't believe Sydney is so backward. So they take their illegal drugs before going out (sometimes taking more than they usually would), or don't go out, or just stick to booze.
Those who do go out find that the nice drugs wear off after a time and booze becomes the only option. It all adds up to people drinking more, a dangerous monoculture.
So is the sniffer dog blitz driving people to drink? It stands to reason.
If so, it's an example of inappropriate rules creating more problems than they solve. Meanwhile the anti-alcohol lobby calls for yet more and tougher rules to solve problems which are being aggravated by other rules. At the same time prohibitionists call for ever-tougher prohibition. The balloon just gets squeezed this way and that. One rule cancels out the other.
But each debate remains in a separate box and the stupidity goes on.
If you are swayed by the anti-cannabis propaganda and think it's the 'new scourge', have a look at the link above to a Q and A around the Marihuana is Safer book. It's a measured, sensible work with a wealth of links to solid evidence, and it does not by any means claim that marihuana is harmless -- just safer. More and more, prohibitionists have to rely on a shrinking base of uninformed people. Truth will out.
You can get the book from Amazon.
Email ThisBlogThis!Share to TwitterShare to FacebookShare to Pinterest
Posted by The Editor at 8:34 am