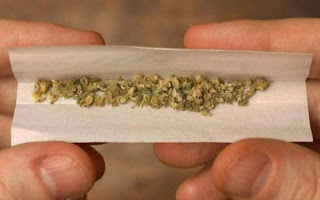 This almost laughable story from the UK Telegraph about a study into cannabis use was actually posted on an email list for Alcohol and other Drug professionals by Herschel Baker of Drug Free Australia. "Cannabis 'can cause psychosis in healthy people'" screams the headline, and it's all about the terrors of the new skunk-style cannabis -- complete with this picture of a skunk joint being rolled.
But the subjects of the study were not even given skunk, and the psychosis was transient, induced by an apparent overdose of pure THC injected into 22 very brave -- or stupid -- men, half of whom got a placebo. Unsurprisingly, those who received the placebo didn't overdose.
An analogy might be injecting people with pure vitamin A -- which is toxic in large doses -- and concluding from the resulting deaths that carrots can kill you (carrots being a good source of vitamin A).
THC overdose is an extremely unpleasant thing, but inducing it via injections proves nothing except that the loony right can still get funding from somewhere and the tabloid press still publish their 'findings'.
The article also repeats the myth that the THC content of street cannabis has risen from 6% in 1995 to 14% now. I have results from a Sydney university study showing potencies of seized NSW-grown marihuana from 1971. They range from 3% to 11.5%, the latter from wild plants picked in the Hunter Valley, decades before 'skunk' was thought of. Meanwhile some of the more looney prohibitionists still claim that potency has increased anywhere between 10 and 25 times. 25 multiplied by a potency of, say, 10% would give us weed which consists of 250% THC, a remarkable exercise in metaphysics.
Note that the study suffers from the usual traits of junk science -- small samples and a reductive method. Surely even the mentally challenged can see the difference between smoking something with an alleged 14% potency and being injected with something that's 100% pure?
It would be almost funny except that these myths still grip the public imagination, which is of course the purpose of such propaganda and of the dishonest charlatans who promulgate it. Never mind the ethics of injecting humans with an overdose.
-------------------------
By contrast, BBC UK published this thought-provoking piece about harm reduction and the concept of 'specific deterrence'. Note the comments below it. Then compare and contrast with the Telegraph piece.
Email ThisBlogThis!Share to TwitterShare to FacebookShare to Pinterest
Posted by The Editor at 10:26 am

Labels: Drugs and prohibition, Junk science, the language of spin

It has occurred to me recently with the bad name alcohol is receiving these days, that we might be witnessing a distinct and weighty push towards achohol prohibition again. I wonder if one of the standard arguments we often use against drug prohibition (that many banned recreational drugs are less harmful than alcohol) may actually fuel an argument for alcohol prohibition.
Dangerous stuff this prohibition.

I agree -- the forces of middleclass self-righteousness are indeed on the warpath. You are also right re the 'drugs less harmful than alcohol' argument -- therefore, say the temperance brigade, ban that too. But they argue themselves into a dead-end because you can't legislate the fundamentals of human nature out of existence. You only drive it underground and increase the harms. As we saw in the days of Al Capone. Prohibition simply doesn't work.

Interesting that the article mentions the BBC footage of a journalist undergoing a pure THC injection and "the unpleasant results" but fails to mention the other part of the documentary, where the researchers inject her with a 50/50 mix of THC and CBD and she giggles so hard she can't talk for several minutes...

Google you tube and THC injection for the full video footage.