Veteran US drug law reform advocate Eric Sterling argues at length that the reform movement is not helped by 'Hempfests' and 'pot rallies', mini-Woodstocks that are ignored by the mainstream.
He's probably correct, given that happy hippies have close to zero credibility among today's slick, sharp urban elites, political advisers, the chemical generation and vigorous right-wing movements powered by corporate subsidies.
On the other hand, argue Hempfest organisers, getting 350,000 people to an event that runs peacefully and happily says a lot about the superiority of cannabis over boozefests.
Unfortunately that is not necessarily the message that gets reported. Cheap jeers at hippies are an easy option for supercilious reporters. Take yesterday when the Nimbin Hemp Embassy floated a giant inflatable joint as PM Kevin Rudd visited Lismore Hospital to talk health. It got lots of press but I wonder how many people got the message that cannabis has medicinal value and that ending prohibition would release huge funding which could be spent on health?
Ironically and perhaps symbolically, the inflatable joint was pricked by the sharp corner of the hospital's "smoke free site" sign. Kevin Rudd just laughed.
Sadly, hippies have not been cool since about 1977 and the rise of punk. All power and joy to today's tie-dyed longhairs but there does NOT lie the path to wider reform.
Picture below of the inflatable joint lifted with thanks from the Northern Rivers Echo. 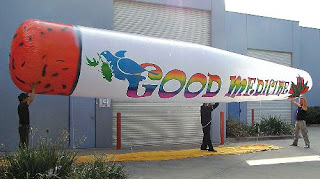 Email ThisBlogThis!Share to TwitterShare to FacebookShare to Pinterest
Posted by The Editor at 10:14 am