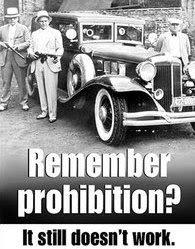 The UK's Adam Smith Institute writes about a Transform paper analysing the cost-benefit of prohibition. Prohibition costs the UK £16.8bn per annum. The benefit varies according to how much you think legalisation would change heroin and cocaine use. As this is not quantifiable, the report projects various scenarios ranging from a 50% reduction to a doubling of use.
The benefits vary accordingly from £618m to –£309m. That's right -- we spend billions to get a benefit of millions, while we can't afford quality health and dental care. The analysis does not even take into account tax revenues the government would receive if drugs were conditionally legalised. It's refreshing to see the free market end of politics at least being consistent, unlike our own 'economic rationalists' who generally support prohibition.
While this dry cost analysis is interesting, the post brought a well put comment from one David Hart, who elegantly sums up the arguments against prohibition. I reproduce it here in full -- I have a feeling Mr Hart would not object. He is replying to a previous comment.

You are right, 555pps, in your assertion that crack and heroin can cause misery. However, so do alcohol and tobacco, and all manner of dangerous recreational activities that we would not think it sensible to criminalise. It looks like you have rather missed the point of this whole debate: it is not about whether something is dangerous enough that it should be prohibited, it is about whether prohibition is an effective and humane way of minimising the harms caused by something dangerous. Even a cursory glance at the statistics will show that prohibition of drugs causes great harm to society, almost certainly greater than that caused by the drugs themselves. And after many decades of trying to eradicate illicit drugs, they are more available and affordable than ever before. This is not just failure, this is spectacular counterproductive failure. Even if there is a substantial increase in the number of crack/heroin users after legalisation, the amount of money we would need to spend on regulating those drugs so as to minimise the risks would be small compared to the amount we currently flush down the pan in a quixotic attempt to prevent people getting a hold of them. And that's before we even get started on the gangland violence, the terrorism, the social chaos that is caused by the fact that the drug trade is currently controlled by criminals who have to use violence to resolve their disputes because they cannot use legal means.
Heroin and crack may be 'evil' (though remember we're talking about a molecule here, not something with a will of its own), but you have to answer the question: how many innocent Columbian bystanders are you prepared to see gunned down in shootouts between cartels and the police per kilogramme of cocaine prevented from making it to our shores? How many American or British soldiers killed by Taliban bombs per kilo of opium intercepted? How many Afghan girls denied an education? How many teenagers in our cities knifed because the current prohibition of drugs makes illegal dealing profitable to violent gangsters? Those who support prohibition also have blood on their hands. If you are prepared to see innocent people killed in the name of sending a message to future generations then so be it, but I'd be careful about using terms like 'evil' if you do.

The picture is from the NORML Foundation.
Email ThisBlogThis!Share to TwitterShare to FacebookShare to Pinterest
Posted by The Editor at 9:45 am

Hats off to David Hart for a great comment.